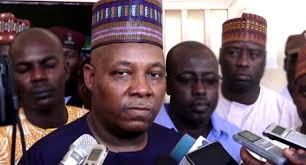 Recieving the report , he described the attitude and behaviour of the Comptroller General of Nigerian Prisons as uncalled for and sabotage to address issues of international concern.

He pledged to contact the Minister of Interior next week to present to him a copy of the report of the investigative panel set up by the state government on 21st March 2019 to investigate all the allegations levelled against the Maiduguri Maximum Prison Service by the Amnesty International in March 2019 .

It will be recalled that the issue of sex violence has become rampant and an order of the day at the Maximum Prison among the inmates who were prosecuted by the state ministry of Justice and sentenced to jail in the past.

The governor commended the panel for their efforts while noting that the allegations were too huge for any responsive and responsible governennt to folds it’s arms and just wtach by not being compelled to take all the necessary action to nvestigate the allegations.

“We can not embarrass the federal government but we can not just watch such allegations pass without nvestigating the issues and expose those who are behind it.

“The allegations are of international dimension and governennt can not fold its arms to unravel the issue. I will go and meet the minister of interior Monday next week and give him a copy of the report to read .

“The strength and quality of any society depends on the way and manner the society treats our mothers, sisters and female children. There is huge problem of child prostitution and trafficking in the country

“The attitude of the Comptroller General of Nigerian Prisons is distasteful and condemnable. There is nothing to hide about these allegations. It seems there is something they are hiding .

” But unfortunately, they were denied access to carry out their investigation at the prisons yard by the controller of Prison Maiduguri who claimed his hands were tight as he had to get approval from the headquarters Abuja,” Shettima said.

Earlier, the Chairman of the Investigative Panel, Barrister Kaka Shehu Lawan who is also the State Attorney General and State Commissioner of Justice said since the period the panel was constituted and inuaguratted on 26th March 2019. “All efforts was made to get access into the Maiduguri Maximum Prison to carry out our mandate and terms of reference but to no avail as the Controller of Maximum Prison Maiduguri denied us access and said his hands are tight. That he has to get approval from the Ministry in Abuja.

“We even decided to write formally l3 etters to the Comptroller General of Nigerian Prisons and Human Rights Commission seeking to get access to the Maximum Prison to carry out our panel assignment but uptil now, the CGP has not replied us and the Controller of Prison Maiduguri who promised to investigate the issues and reach us back could not do anything till now.

“The withdrawal of DCP as a member of the investigative panel by the CP later was also another problem. We submitted the letter of appointment of the panel by the governor and terms of reference of the panel to the prison controller but still he refused us access to carry out our assignment,” Kaka said.

The panel submitted 10 copies of the Investigative Panel report to the governor for further necessary a room.

How federal universities are covering up corruption, sexual harassment—SERAP