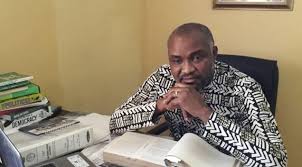 There are things that when said by some persons should not be interpreted from a literal point of view but should be subjected to intensive philosophical introspection and empirical examination so as to identify the essential elements and parts that make up the whole.

The Igbo used to say that it is not every dancers that receive rousing approval from the audience because some would dance and get public denunciation, even as some others will dance and the audience will be thrilled to a dizzying point of pouring encomiums and gifts.

These cosmological viewpoints aforementioned are necessitated by some comments that recently emanated from high quarters regarding the sanctity of our security and safety as citizens of the Federal Republic of Nigeria.

The first was made politically by no less a person than the president in which he offered a frightening explanation of why president Muhammadu Buhari has yet to make known his decision on the next yeara��s presidential poll.

The presidency was quoted in the media as saying that with a full year to next yeara��s poll, it will be dangerous for him to disclose his ambition for second term in year 2019 because doing so will give those he called saboteurs enough time to unleash venoms of destruction and all kinds of attacks to derall the election.

The implication of this is a clear admission of the fear of the potency of some forces who are equipped enough and indeed capable of disrupting the smooth implementation of government policies and programmes all in an effort to derall the election which is a clear one year away.

The second implication is that Nigeria has a commander a��in-chief who is so afraid that he may not be capable of defending Nigeria and Nigerians all because of the perceived overwhelming capacity of certain political forces bent on stopping the president from even making the innocuous declaration of intent for next yeara��s election.

This is the only time and indeed the only modern day nation in which the person holding forth the office of president is afraid of some shadowy political opponents who by all intents and purposes do not control the corridors of political power and therefore are not in charge of the armed security forces. Most modern day nations like Russia and China including the Western nations, political leadership is usually given to persons with strong will.

Besides, this declaration of weakness and incapacity to weather any eventual storms, should understandably put fear in the minds of the citizens who have empowered the president to defend the country.

Speaking about the spill over state of apprehension sparked in the minds of discerning citizens from the significant imports of that statement from the presidency reminds us of the extensive and far- reaching implication of the second major statement that closely relates to the aforementioned.

This time around, the spokesman of the Defence headquarters submitted and admitted publicly that the military lacks the capacity to defend schools from attacks by terrorists.

As captured in the media report, the Nigeria military last Friday said it doesna��t have enough workforce to have a huge security presence in all Nigerian schools to avoid terrorista��s invasion or abduction of pupils.

Defence Spokesperson, Brigadier General John Agim, who was a guest on Channels Television Breakfast Programme, Sunrise Daily said due to the huge land mass, especially in the Northern East which is volatile to attacks, it is difficult to deploy troops to schools.

a�?The military doesna��t have the manpower to deploy (troops) to all the schools. It is not possible.

a�?People dona��t know the land mass that we have in the North East and the number of troops that are deployed in that place. The land mass is very large,a�?

Agim, who lauded efforts of the Federal government which has authorized Civil Defence and the police officers to secure schools in Northeast Nigeria, emphasized that the military cannot deploy to schools like some people are demanding.

a�?It is very difficult. It is not possible,a�? he said.

The Defence Spokesperson also blamed this lack of sufficient man capacity on the abduction of over 110 schoolgirls in Government Girls Science and Technical College (GGSTC), Dapchi, Yobe State.

Explaining the role, which the military played in securing Northeast, Agim said the military wasna��t negligent as being rumoured but the troops were redeployed for other assignments few weeks before the terrorists, unfortunately, invaded the school in Dapchi.

a�?Where the military was deployed in Dapchi, they (the troops) were taken away. They were deployed for other assignments. So, it is possible that the Boko Haram can operate in a place for a long time without the military presence.

a�?They were withdrawn out of Dapchi for another assignment on January 10 and this attack took place on February 19,a�? he said.

Dapchi, a remote town in Yobe State was a safe haven before the abduction of 100 schoolgirls in GGSTC.

Recall that although a sizeable number of schoolgirls have been returned, Nigerians are reportedly still left in shock over the attack, wondering which school or pupils will be the next target by the terrorists.

This statement from the highest military echelon is scandalous and amounts to admitting that the Nigerian military cannot enforce the mandate bestowed on them by the constitution as enshrined from section 217. It goes to show that contrary to the propaganda about the development of drones, the country may afterall be deficient in modern day military technology such as drones to monitor areas that can’t be reachable by foot. This admission of lack of the needed forces to protect Nigeria efficiently is unconstitutional.

I will reproduce the relevant sections of the constitution that relates to the duties, responsibilities and powers of the armed forces of Nigeria as captured in the constitution so as to show the extensive damage that the admission made by the spokesman of the military has done to the image of the Nigerian military.

Against the backdrop of these constitutional provisions, the statement of proof that the current institution of the military cannot defend just a part of the countrya��s territorial jurisdiction is big enough for the National Assembly to carry out a review of what we have as military institution and to come up with forensic findings regarding the capacity of the military to defend Nigerians. Nigerians need reassurances of their safety as citizens.

This assignment for the legislators is sacrosanct because all arms of government are asked by the constitution to carry out the primary purpose of protecting the lives and property of Nigerians.

If therefore the most strategic institution empowered by law to defend Nigeria has told the World that it cannot carry out the simple task of defending fragments of the whole of Nigeria, we can as well individually decide whether to look for areas of safety around the globe.

The examples shown by George Bush as President of the United States that was bombed by terrorists tells so much of how courageous a leader should be.

His former Spokesman wrote the following about Bush: a�?Bush also believes that America has an obligation to use its power to lead the rest of the world toward a better and more secure future. And he believes a leader should think and act boldly to strive for the ideal. Therefore, Bush believes ita��s important for his advisers to think about specific actions in terms of larger, strategic objectives a�� how they fit into the bigger picture of what the administration seeks to accomplish”.

“Finally, Bush was genuinely concerned about America being hit by terrorists again. The anthrax attacks had only heightened those concerns. Bush meant it when he said he would never forget the lesson of 9/11. He was determined to act before potential threats fully materialized.”

The ex-media adviser of Bush also wrote as follows: “When these beliefs were combined in the post a�� 9/11 environment, the result was the most consequential decision of Busha��s presidency. The line between the Bush national security teama��s preexisting desire to see saddam gone and a new emphasis on acting against real and growing threats before they are imminent was quickly disappearing”, see the book a�?What Happened? inside the Bush White House and Washingtona��s Culture of Deception” by SCOTT MCCLELLANa�?

“Thus, within the context of total defence, the military can bring their qualities, skills and expertise to bear on various aspects of the economy in pursuit of national development and modernization. This is through the training of paramilitary forces and civilians, as well as Research and Development (R&D), and constructions”, see the book titled; “Issues in the mobilization of public support for military operations in Nigeria” by Major Gen Chris Olukolade.

Generally, from an bird’s eye view of the essential functions of the modern day military, the scary admission of lack of capacity of the Nigerian military as stated by the spokesman of the Nigerian military gives every patriotic citizen a cause for worry. Only a comprehensive legislative action monitored by credible civil society leaders can once more reassure Nigerians of their safety in Nigeria.