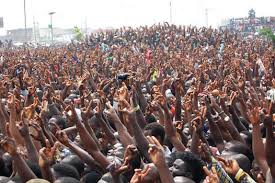 If you want to know the future of a country, look at youtha��s life today. Pampered Leaders on scholarships and welfare throughout their life, are paying back with thorns and daggers at the back of our youths while celebrating themselves and their children. They are obsessedwith funerals when they die at some prestigious hospital abroad, boldly displayed on their obituary. They are Pharaoh that had Hummer SUV buried with them or looted cash buried in their graves.

The first million an African makes is not for local or productive endeavors, but for luxury abroad they must loot more tosustain. In the days when Volks was the first car of those just starting to make it, success were made gradually in steps.Looking up to looters, Mercedes Benz is the first choice. Unfortunately, the first African assembly plant was not for tractors and machine needed in factories. Indeed, we still imported luxury cars to kill our local automobile assembly plants.

As much as we must praise Dangote for building the largest oil refinery because it will meet local demands and export to other African countries, there is this eerie feeling that it should have been built fifty years ago. Better late than never, we must say. But will an oil refinery meet future demands when most world automobiles makers have switched to electric engines. We must learn, as Ajaokuta Steel lie fallow while the world is competing on steel glut.

It is really surprising that University of Lagos seems to be embarking on another refinery in addition to that of Dangote in Lagos. It makes no sense to establish another old arcade industry when the future is on solar and electric automobile. This writer has written in the past begging for economic projects from our universities when Nigeria bypassed agricultural scientists from our universities to import Zimbabwe white farmers with all incentive to Kwara.

Africa must look into future projects jointlysince only 15% of our trade is within so 85% abroad;ordered to grow what we do not consume. Yet, some states declare Free Trade; for who? Saudi Arabia and Softbank solar project , is to be established at expected cost of $200 billion through 2030, will have the capacity to produce up to 200 gigawatts. It will support the domestic solar equipment manufacturing industry in their kingdom.The project will create about 200,000 jobs in Saudi Arabia and increase GDP by $12 billion, while it will save Saudi Arabia about $40 billion.

Cobalt scramble in Congo is being monopolized by China, car companies like Tesla are buying it into the future to secure production of electric cars. Apple, Samsung as others, computer makers and warmongers negotiate to get their shares. Just as important is the alarm to control Niger uranium so that it does not fall into wrong hands as weapon of mass destruction. While Congo and Niger the raw producers, look on as just bystanders! Where are our intellectuals?

Angola former head of state son and daughter(declared asAfricaa��s richest lady) have been involved in money laundering for years. Hong Kong and Shanghai Banking Corporation: HSBC have frozen $500m belonging to the son. These people have no conscience, worse than cold blooded killers in their countries where women and children die for lack of care and economic opportunities. HSBC froze Jose Filomeno dos Santosa��account linked to $500m Angolan fraud .

It showcased our leadersa�� role sucking blood out of Africa for crumbs, bargaining youtha��s future and heritageaway. It is not only oil deals, the same is true for gold, diamond, uranium and now cobalt in Democratic Republic of Congo. If you waged war in yours or another African country and smuggled raw diamond out like Charles Taylor, you are just as quality. This is the modern day scramble for Africa with our leaders as accomplice selling us for pittance.

We thought once the colonialists left, that would be the end of extractive economy . We were wrong, black faces just replaced their masters and continue to sell irreplaceable resources to foreigners by taking a big cut at the top while national companies pocket theirs and of course leaving the country and its youths with crumbs. Wickedly, they still flare, waste our gas and buy elsewhere for import. One case out of many is a good look at Shell, Eni, OPl245 and Ette .

In Nigeria today, no one can leave allocation, stipend or grant under the watchful eye of the law without individual schemer, group or invited robbers on how to conspire and steal everything! It has come to the point where most of the people in charge are wondering who is going to go first. The justification varies from stealing is not corruption to various animals swallowing our cashistics. If it was not for dying women and children, one would consider it a deadly joke.

Mind you, it is not that the youths are without faults, especially in term of their foreign tastes at the expense of local goods and services. Agricultural products from which we are blessed, are neglected because of the hard work involved. The world has moved beyond hoe and cutlasses into mechanized farming. There is no reason we could not develop those equipment locally; as tryctors and Innoson trucks with mostly local partsas forex earners instead of drainer.

Agricultural work can be professionalized with locally invented machines like those that replaced the old dangerous and back breaking work in their factories. Our youths must be trained and exposed because when they run out of the country, these are the back breaking jobs available to them most of the time. We pay through our nose to bring plumbers, iron workers and other skilled workers to our countries only for them to direct local workers.

If you think that since we had local production, the prices would be within reach or pockets of the poor farmers to buy, you would be wrong. Producers of local goods and services want about the same price as imported products negating the benefit for our local entrepreneurs that pass the cost to retailers. The rational is, if they could buy imported products for the same price as local, they might as well pay for foreign equipment. Yet ground workers earn low wage.

Nevertheless, while advocating for reduced profits on local equipment, agriculture must be professionalized with tryctors, trucks, local fertilizer and refrigerated storage on wheels. It will make the backbreaking labor easier. The role of the governments would be to grant low cost loans specifically toward local affordable tryctors local farmers could handle. Government must also go back to cooperative societies bringing lone farmers together in joint agribusiness.

Nigeria: The Slumbering And Plummeting State Of Human Rights

Criminals on the International Criminal Court