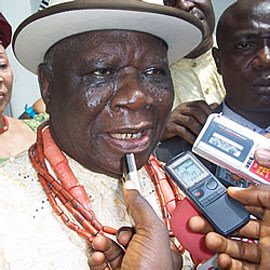 The world, including yours sincerely, has carefully followed thesiege and two-hour thorough but fruitless search conducted byoperatives of the Nigerian Police Force on the Abuja home of foremost elder statesman and vocal Niger Delta leader, Chief EdwinKiagbodo Clark, the criticism it has attracted to the Nigeria Police Force and the frantic but flimsy excuses of the police for its poor handling of the situation. We equally listened to and read theplaintive explanations of the police over the unverified information which swayed it into the embarrassing siege and search; the arrest of the police informant – Ismail Yakubu; Yakubu's narration of what hewitnessed, why he decided to inform the police and the actual information he gave the police. We heard the resolve of the Nigeria Police Force to prosecute 45-year old Ismail Yakubu for the offence of false information. Finally, we also saw the unprecedented humblepolice apology to Chief Edwin Clark. Before I proceed to the main thrust of this piece, I want to commend our elder statesman, Chief Edwin Kiagbodo Clark for his fatherly and patriotic disposition in accepting the apology of the Nigeria Police Force and forgiving the force. I say this because an action against the police would have been a big distraction for the force at this critical point and could certainly deplete the meagre resources of the underfunded Nigeria Police Force and yield costs in the form of damages in favour of the wronged elder statesman. This is enough to say that Chief Clark's act of forgiveness was a good lesson in sacrificial patriotism for all Nigerians to learn to copy in the interest of the nation. One must not fail to commend the Inspector-general of police of Nigeria Police Force – Kpotun Idris, for his unanticipated and unusual act of humility which has saved the force costs and abated the force's embarrassment.

According to interview and other available reports, Ismail Yakubu, a cabinet member in one of the rural communities in FCT, was in a taxi and on an errand in Asokoro when he saw a road block, a crowd and a “sealed” hilux van entering a compound. Curious Yakubu inquired from the cab driver why the road was blocked and wasinformed that the road was blocked because arms were being taken into the place by the sealed Hilux van. This heightened the curiosity of patriotic Ismail Yakubu. Ismail said he recalled the often-hypedrequest of the police (and other security agencies) for citizen's to see security as a collective responsibility; and to always report suspicious movements to the police or security agencies. Buoyed by the alarming disclosure from the taxi driver and patriotic intentions to save his country from trouble, Ismail Yakubu decided to act by making the information available to the police. Reports show that at every point in time, Ismail Yakubu made the police know what he saw and what he heard which were that he saw a crowd, a road block and a Hilux van entering house number 43; and was told on inquiry by the driver of the taxi he boarded that the van was taking arms into the compound. There was no time Ismail Yakubu said he saw arms. The fact that Ismail Yakubu's information to the police was a product of heresay and was disclosed as same to the policeshould have compelled a proactive police force to conduct further investigations of the report through discreet surveillance and monitoring of the said house number 43. This is more so given that Ismail Yakubu did not and had no power to investigate the information he got from the itinerant taxi-driver. Ismail Yakubu merely made the information at his disposal available to the police. The robotic approach of the police which handled the report without basic discretion cannot make the patriotic action of Ismail Yakubu blame-worthy. The police hierarchy which ordered the rash operation should take all the blame for the embarrassment it caused the elder statesman and Nigeria over this matter.

Even now, there is no falsehood in the information given to the police by Ismail Yakubu in this particular matter and good conscience demands that the police should drop the charge of false information against him and release him without further delay. TheInspector-general of Police should infuse more care in the management of Ismail Yakubu and his information because this matter is graduating into a test case on the much taunted community policing or security cooperation between the security agencies and the masses; and the Nigerian masses are following it with keen interests. If the unnecessary harassment and vilification of hapless and innocent Ismail Yakubu continues, there is every likelihood that ordinary Nigerian masses may find it difficult to volunteer pieces of correct and factual information to the police and other security agencies. This cooperation, I must add, is very necessary in crime-prevention and control. Furthermore, the reaction of the police force to the uproar which followed the unwarranted siege by singling outthe operatives who executed the search on Clark's house for punishment is completely wrong, unacceptable and has potentials to demoralize personnel of the force. Such punishments should be reversed because they acted on and within the orders of their superior. In a regimental set up like the Nigeria Police Force where operatives must obey the last order of their superiors, superior officers should be made to take responsibilities for the orders theygive. That is the only way to guarantee the loyalty of the personnel which is necessary for healthy policing. One must acknowledge thatone good thing about Ismail Yakubu's report is that it has exposed the weaknesses in the operations and disposition of the Nigeria Police Force to the war against crime. With the benevolence alreadyshown to the force by Chief Edwin Kiagbodo Clark, all the police needs to do now is to work hard on its weaknesses.

Is Peruzzi a Rapist?

Democracy Or Autocracy In The Next Level

12 thoughts on “Siege On Edwin Clarkea��s Abuja House : Ismail Yakubu Not At Fault”