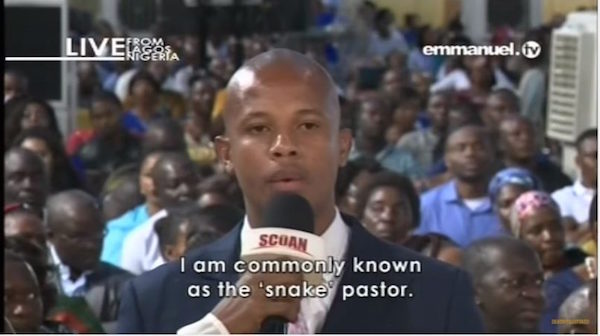 ‘Snake pastor’ Penuel Mnguni of End Times Disciples Ministries has made a U-turn since his appearance on Emmanuel TV on Sunday.

Mnguni visited TB Joshua’s Synagogue Church of all Nations in Nigeria on Sunday, and explained why he had fed his congregants live snakes. Mnguni, who described himself as an “overseer” of his church, said he had misinterpreted the Bible, and did what he thought was scriptural at the time.

It was after watching TB Joshua on TV that he realised what he was doing was wrong. He said he went to Nigeria to seek deliverance from the prophet.

Now he has come out saying he had to say all of that because he feared for his safety in Nigeria.

He told Daily Sun he did not know he would be “forced” to speak in front of people. Mnguni claimed he was invited to the church, and only went there for “worship” and not deliverance, but was shocked when on arrival, “those people” took his passport and ID and threatened not to give them back unless he did whatever they wanted.

“It was as if everything was planned before I even got there. If you listen to the video, I am not the one saying those words. There is a woman next to me who is forcefully telling me what to say,” Daily Sun quoted him as saying.

From watching and listening to the video, it seems the pastor’s claim is right, as a woman can be heard saying the exact same things he says.

He told the tabloid Mnguni only wanted to continue being controversial. He was never forced to do anything, he said.

“He is an adult, and he can’t be forced to do anything. The problem is he just likes to cause a scene,” Nematandani told the tabloid.

During his visit in Nigeria, Mnguni told TB Joshua he realised he had misinterpreted the Bible when he fed congregants rats and snakes.

He said: “My name is pastor Penuel Mnguni from South Africa, a general overseer of End Time Disciples Ministry based in South Africa. I am known as ‘snake pastor’. I’m popularly known as the ‘snake pastor’ due to the demonstration that took place in my ministry when I gave live snakes to my congregants to eat.

“After my message, I demonstrated, and I gave them snakes, live snakes, to eat. After that, the media all over the world, all the newspapers in South Africa, even outside the country, they were running after me, following me everywhere, even the government was attacking me.

“SPCA opened a case against me, I was arrested, then I was released. I came to realise that what I was doing was not written in the bible.

Buhari: If You Elect Me, I Shall Serve You To The Best Of My Ability