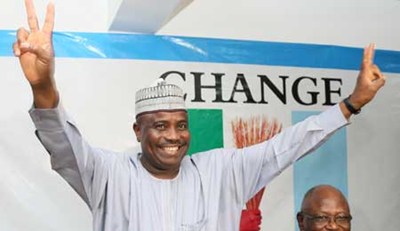 Sokoto state chapter of the All Progressives Congress (APC) said it has adopted Governor Aminu Waziri Tambuwal as its candidate in the 2019 governorship election.

Alhaji Usman Sulaiman, Chairman of the party in the state, said they are convinced of what Tambuwal has achieved as a governor so far, and will continue to support him to render more quality service to the people.

a�?As a party, we will support him not only for second term but for third and fourth term if such would be allowed by the constitution. Governor Tambuwal has performed credibly well despite some challenges occasioned by the economic situation in the country,a�? he added.

The chairman said other areas of achievements include payment of salaries, pensions and gratuities, revamping of the education sector, and the huge impact Tambuwal has made in the social sector.

a�?When we lost our indigenes in Saudi Arabia during the Hajj stampede, Tambuwal paid N500,000 to each of the families of the victims. That is the only support they got from the authorities. For that and many, we will be eternally grateful to the Governor,a�? he noted.

Sulaiman described the leading opposition party in the state, the Peoples Democratic Party (PDP), as a “mushroom” party in desperate need of salvation.

“What do you call a party that cannot produce a single councilor? Is that one a party?” he queried.

Reacting to the allegation that the APC is paying PDP supporters to defect, the chairman said that is not true, and that all the PDP members that defected did so having realized that the PDP has no future.

“We don’t pay people to join us. They are the ones coming and pleading to join us because they know their former party is nonentity in the state,” he added.