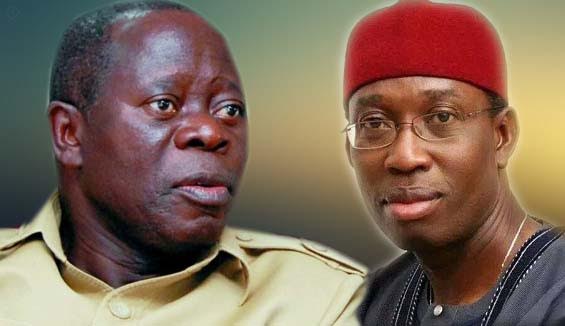 Following the utterances of the All Progressives Congress (APC), National Chairman, Comrade Adams Oshiomhole, to wrestle power from the Peoples’ Democratic Party (PDP) led-government in Delta State, the state governor has called on him to focus attention on his problems ridden party.

The Director-General (DG), Okowa Campaign Organization, Mr Solomon Funkekeme, made the call Thursday during a press briefing at the Campaign Council office in Asaba even as he noted that APC was not in existence in the state let alone to take over power from PDP in the state.

This is coming at the heels of the flag off of PDP campaign Friday in Oghara, saying PDP is not worried or losing sleep about APC National Chairman Adams Oshiomhole' utterance of taking over Delta state.

Funkekeme directed the APC National chairman to focus his attention on how to solve his party problems lying on his table rather than involving in Delta politics, saying that he has no voting right or absolute control of the electorates in the state.

He assured that “we are not going to lose the election for any political party and over ambitious Oshiomhole”.

He gave three reasons why PDP is campaigning to win the elections; to remind Deltans about the principle of zoning, to sale other PDP candidates and to let them know that it is the constitutional right of Okowa to contest especially as a Delta Northerner.

“Okowa has been a good ambassador in all the 25 councils of the state in terms of infrastructure, economy and peace. He delivered on his campaign promises.

“I can tell you that this power rotation has so far brought about peace in the state. It gives us sense of unity and balance as a people. Everybody has an ambition to contest but let his ambition not disrupt norms and principle of zoning in the state”, he said.

But in his swift reaction to the claims of the PDP, the Publicity Secretary of APC in the state, Mr Sylvester Imonina, in a telephone chart told The Nigerian Voice that the PDP was jittery and that they have lost the election hence they resort to falsehood.

“As a matter of fact, the PDP caused internal problems in our party but now that they know that we have resolved it, they have lost their sleep. I know that Mr Okowa, is no longer sleeping”, he asserted, saying APC will sweep Delta and Ogboru will be sworn in come May 29, 2019.

He said Deltans were tired f the PDP in the state and are willing to vote them out of power by voting amass for the APC governorship candidate, “Deltans have picked up their PVCs and are ready to vote for Chief Great Ovedje Ogboru as governor of the state. I saw one of their supporters and I asked where he is going, he said he is going to collect his part of the money in Oghara”.