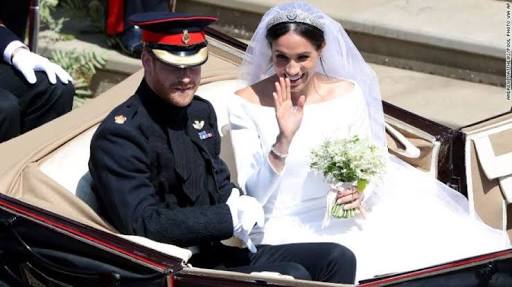 The royal wedding has come and gone and just as expected all sorts of speeches and posts have surfaced in Nigeria. It was a busy day for me so I did not have the luxury to see the wedding on TV like many did.

But what i missed was made up by several posts and tweets by my fellow Nigerians and it was mostly about how modest the bride's dress was and how organized the event was and all sorts. Some spoke against our politicians and how our protocols and security could be better organized during events because it is always as if someone is trying to kill all our leaders.

Honestly I don't have any issue with that because those were issues we all know already. I also saw how we compared the church service with the Nigerian churches and how many even went as far as slating their pastors and all. Of course, that is also expected going by what has been happening over time in our nation.

ARE WE BRITISH?
If we are Nigerians then our culture would ordinarily have a lot of roles to play in the way we celebrate events. Infact our religion would be at the mercy of our culture. For your information you will struggle to find a celebrity British religious leader for example but you will not struggle to find Americans who are. Does that make Britain better than America?

It is all about the culture of the people.
We are a different people and while there are aspects of our culture that has outlived its usefulness let's also know that there are aspects that is good. We are a people loving and caring nation and it is only natural that our weddings should reflect that.

We are lovers of dance and food and it is only natural that our weddings should reflect that. We also love to express our affluence by extravagant show and that is why our weddings must be a show.

To seek to draw inspiration and lessons from the royal wedding is good but to seek to compare us with them is not right because there is no basis for that. Britain is clear about her national identity and is a first world nation; we are a people colonized by Britain but aspiring to live the American life so there is confusion to start with. Who are we as a people.

My joy
My greatest joy however with all the rantings is that finally we are admitting that something is wrong with our culture that needs to change so for starters let's start doing something that will happen to the royal couple even from our various families;

1. The groom is not likely to walk into marriage expecting the bride to cook for him because she may not cook and he won't consider her a failure for that. Infact he is likely to fix her some meals in bed. So can our men also repent by learning how to cook so that both husbands and wives can cook so that we stop fighting over who should cook when we are both hungry. Or maybe you can just hire royal chefs for your family.

2. The bride had a defined career path before this marriage and she was known in her sector as a hardworking lady. Can some of our women who are still lazy also roll their sleeves and get to work as against looking for that rich dude who will bail them out of poverty. This bride is not likely to look at the groom and misquote the bible 'If any man can not provide…….bla bla bla….'

3. The groom is not likely to engage in domestic violence because the british laws are very clear and there is almost zero tolerance for that. As a matter of fact his identity as a royalty forbids him from doing that. So can this serve as a reminder to all our men to commit to a non violent marriage and can our women commit to a non verbal abusive marriage because some men have lost their erection due to the verbal missiles from their wives.

There are many cultural lessons to draw from this wedding but let me say that simplicity is not the same thing as cheap. That the wedding gown looks simple and that the wedding looks moderate doesn't mean it came cheap and you may want to check the numbers however I agree with you all about the fact that no boobs showed up at this wedding. Even the American guests were well dressed and that could only point to one factor – Respect for the British culture.

What is the Nigerian culture?
When your culture is not known, false or not based on truth, equity or fairness and when a culture becomes static and struggles to evolve even when the dynamics have changed several other culture will find expression and make us look like a confused people.

So it is not so difficult to notice our confusion because we are multinational and cultural in our daily expressions where we speak Yoruba English with American accent and seeks to live a first world life where it pays us and revert to a third world life when our selfish interest is under focus.

The greatest lesson at the royal wedding is a lesson of CULTURE.

We can't be Nigerian -that is if we know what that means; and seek to behave like British but when we create a new culture that is fear to all it will show in the way we treat the next man and ultimately the way we celebrate our events.