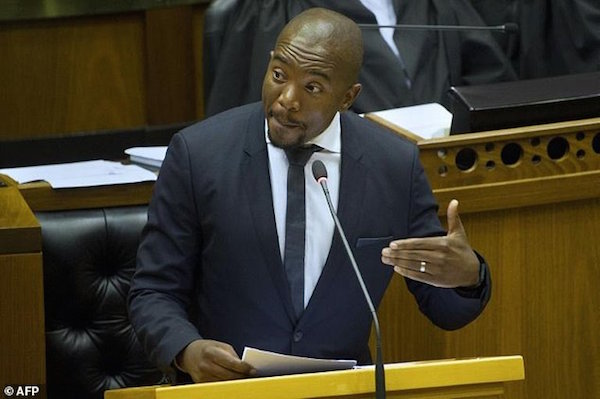 “Maimane has this evening been forcefully prevented from entering the Republic of Zambia, by Zambian Police who boarded his arriving South African Airlines flight upon touchdown,” the statement said.

Hichilema is due to stand trial on Friday over allegations he endangered the Zambian president’s life in April when his motorcade failed to give way when the head of state’s limousine tried to pass.

“Mr Maimane had strongly denounced the trumped up charges against Hichilema, and had condemned the (South African) government for not yet taking a stand against his treason charges,” the DA said.

“Upon arrival Zambian Police boarded the aircraft, aggressively confronted Maimane, and have taken his private cell phone from his possession.”

Hichilema, 54, was arrested for allegedly obstructing President Edgar Lungu’s official limousine as both men travelled to a public event in Zambia’s Western province.

Hichilema’s lawyers appealed to Zambia’s courts to throw out the treason charges, saying they were baseless.

Suspects on treason charges are not eligible for bail in Zambia, and could in theory be sentenced to death.

Hichilema, a wealthy self-made businessman, has been in custody since police raided his home on April 11.

He made a fifth unsuccessful bid for the Zambian presidency at last year’s election and has challenged the poll result in court after he narrowly lost to Lungu.

The election campaign was marked by clashes between supporters of Lungu’s Patriotic Front party and Hichilema’s United Party for National Development.