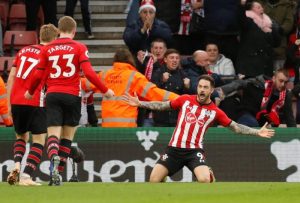 The thrilling match was heading to a possible stalemate when Southampton striker Charlie Austin capitalized on a howler from Gunners goalkeeper Bernd Leno to seal a shock 3-2 win on Sunday.

Southampton had twice taken the lead through Danny Ings, only for Henrikh Mkhitaryan’s brace to draw Arsenal level on each occasion.

Leno’s mistake and Austin’s predatory finish handed Arsenal their first defeat in 15 league games and brought a stunning halt to their longest unbeaten run in all competitions since 2007.

Unai Emery’s fifth placed team hadn’t lost since a 3-2 defeat at Chelsea in August and the north Londoners’ first setback since the summer leaves them two points behind the fourth placed Blues, who won at Brighton on Sunday.

While it was a bitter afternoon for Arsenal, Southampton’s first win in 15 matches in all competitions was cause for much celebration.

Southampton manager Ralph Hasenhuttl, taking charge of his first home game, danced a jubilant jig on the pitch at full-time after securing the maiden victory of his reign.

Hasenhuttl watched Southampton lose 1-0 at Cardiff in his first match and, in a PR stunt this week, he sent free drinks vouchers to Saints season ticket holders.

The Austrian, who left his role as Leipzig boss in May, was the toast of St Mary’s after Southampton won at home in the league for the first time since April to climb out of the relegation zone on goal difference above Burnley.

Laurent Koscielny was making his first Premier League start since April after recovering from an Achilles injury, but Arsenal’s French centre-back looked rusty when Southampton took a surprise lead in the 20th minute.

I found this interesting

Chelsea not title contenders despite super start for the season: Sarri