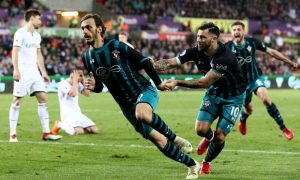 The victory left their relegation rivals deep in the mire.

The result saw West Bromwich Albion relegated to the Championship and left Southampton on 36 points.

It ia three points clear of Swansea heading into the season’s final round of matches this weekend.

With Southampton’s goal difference better than Swansea’s by nine, it would take a remarkable swing against the south-coast club for them to drop out of the top flight.

Swansea need to win their final game against already relegated Stoke City and hope Huddersfield Town lose at Chelsea on Wednesday and at home to Arsenal on Sunday. (Reuters/NAN)