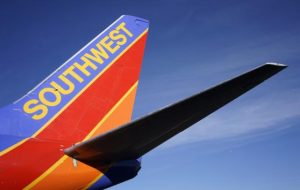 Passengers on board a Southwest Airlines plane screamed, cried and vomited during an attempted landing in a storm in New Orleans.

The harrowing incident on Southwest Airlines Flight 3461 on Saturday also prompted one passenger to send goodbye texts to loved ones as the pilot attempted to land the plane, which had set off from Fort Lauderdale.

a�?I thought we were going to crash,a�? WWLTV reporter Lauren Bale, who was a passenger on board the flight, said.

a�?It was going all over the place. People were screaming, people were crying. The flight attendants were yelling over the speakers to fasten seat belts as tightly as possible and I was texting my family goodbye,a�? she added in comments carried by UK newspaper The Daily Mail . a�?I just dona��t understand why [Southwest Airlines] put everyone in that situation.a�?

Another passenger, Marie Wary, told WWLTV she felt like she was about to die as the plane attempted to land, while at least one passenger vomited during the incident.

After attempting to land at Armstrong International Airport in New Orleans, the plane was redirected to Panama City, in Florida, where it refueled and later continued on with its journey a�� eventually landing safely.

But given the storm, there were questions over why the flight was not cancelled before taking off, rather than trying to fly through the bad weather, with KGW reporting passengers saying there was little to no visibility with thunder and lighting during the attempted landing.

In a statement, Southwest Airlines said: a�?Our top focus is Safety. Flight 3461 from Fort Lauderdale to New Orleans arrived about four hours behind schedule after persistent thunderstorms over New Orleans forced prolonged holding near New Orleans awaiting clearance from air traffic controllers followed by a refueling stop in Panama City before the completion of the journey.a�?

a�?The Safety of our Customers and Employees as well the Safe operation of every flight is our highest priority,a�? the statement added.

This article was first written by Newsweek