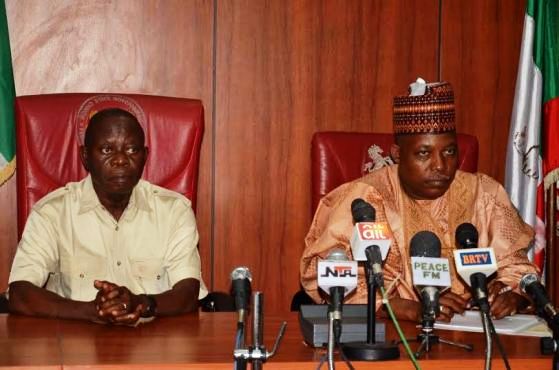 An APC national peace and reconciliation committee set up over crisis in the Southwest has on Thursday submitted its 60-page report of analytical findings and far reaching recommendation to the party's national chairman, Comrade Adams Oshiomhole in Abuja.

Governor of Borno State, Kashim Shettima, who chaired the committee, sent copies of the report accompanied by a formal letter addressed to the Oshiomhole, both of which were delivered to the party chairman by the committee’s secretariat. The committee had Governors Nasiru El-Rufai and Akinwunmi Ambode, former Senate President, Senator Ken Nnamani, former deputy governor of Ekiti State, Professor Modupe Adelabu, the D-G, NIMASA, Dr Dakuku Peterside and Barrister Sa’ida Sa’ad Bugaje and members.

In his letter to the national chairman, the committee's chairman, Governor Kashim Shettima said rather converging members for a public presentation, the committee delivered the report through its secretariat, in response to Comrade ‎Oshiomhole's passion and eagerness to address areas of concerns in the southwest to reposition and strengthen the APC in the southwest.

The committe's secretary, Isa Gusau, said in a statement emailed that journalists that the delivery was to ensure a timely report that will be useful to the party rather than a delayed public presentation that may not be useful.

Gusau said the report contains submissions by members from consultative meetings and the committee’s interactive hearings in Ado-Ekiti for Ondo and Ekiti States, in Ibadan for Osun and Oyo states and in Lagos for Ogun and Lagos States. He added that the report contains state by state submissions, analytical findings that are supported by graphical illustrations and recommendation on each of the six states made up of Ekiti, Lagos, Ogun, Ondo, Osun and Oyo.

The statement recalled that the committee had met with Vice President Yemi Osinbajo, and other leaders including Governor of Ogun State, Ibikunle Amosun as well as party leaders from the six states.

Last week Wednesday, the committee held its last sitting for Ogun and Lagos States which took place at government house, Marina. Major stake-holders of the party in Lagos state including Governor Akinwunmi Ambode, the party's governorship candidate, Babajide Sanwo-Olu, state chairman of the party and members of the Governors' advisory council were all present at the opening of the committee's meeting. In Lagos, the committee also met the state chairman of the APC in Ogun State alongside Speaker of the Assembly. ‎Before Lagos, the committee held similar hearing in Ibadan and met the party’s members and strategic allies from Osun and Oyo states.

The Ibadan hearing was preceded by the first hearing in Ado-Ekiti for aggrieved APC members from Ekiti and Ondo ‎states during which the committee received and discussed written and oral complaints against the conduct of the party's primaries in October and November.

In all meetings, the committee focused on consoling aggrieved members, reassuring them of possible inclusiveness in addition to seeking their inputs on how to increase the APC's chances in the southwest ahead of the 2019 election.