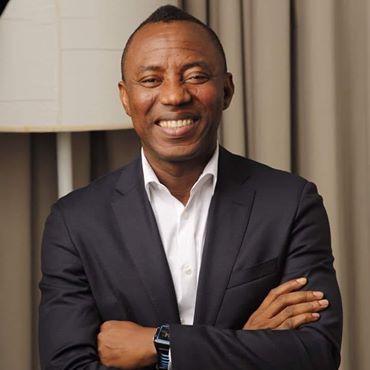 Most of us who held our noses to support President Muhammadu Buhari again in the last election had hoped for true change, if he was re-elected. Two months into the second tenure, while it may appear as if though Buhari is indeed incorrigible, it is definitively clear that he has forgotten why and how he became democratic president in the first place. If that were not the case, there is no way Buhari’s regime would be colluding with the courts to detain Omoyele Sowore, the presidential candidate of African Action Congress (AAC) in the last election without bail.

Flash back to how we got here. The 16-year reign of the People’s Democratic Party (PDP) was an embarrassing failure. Yet, the then ruling party was boasting that it would rule Nigeria for 60 uninterrupted years whether we “like it or not.” Elections had become mere charade. Though the country was in dire need of change, the change appeared impossible.

Many prominent politicians aspired to wrestle power from the center during that era, but none was more consistent that General Muhammadu Buhari (rtd) who had always garnered massive votes from northern part of the country by tapping into a visceral anger provoked by gross misrule by the PDP under southern leaders. Yet, Buhari needed broader opposition to win the presidency. One of the patriots that answered that call is the publisher of the New York-based Sahara Reporters, Mr. Omoyele Sowore, a globally celebrated anti-corruption advocate, well-known for speaking truth to power.

Armed with an activist pedigree, Ivy League education, and a cult-like army of social media warriors, Sowore became a torn in the flesh of various PDP regimes. Together with his popular tabloid, Sowore keyed into the vanguard of the political revolution that made it possible for Buhari to make history by unseating an incumbent president in Nigeria. Even though they had ideological differences, Sowore saw Buhari’s anticorruption record as a common ground. More essentially, removing PDP from power was an ultimate compromise.

Throughout Buhari’s quest for the presidency, from 2002 to 2015, he adopted a revolutionary approach replete with inflammatory rhetorics. For instance, he is on record to have urged Nigerians to emulate the example of Arab Spring Revolution to oust the regime of President Goodluck Jonathan in 2011. He followed in May 14, 2012 to charge that “If what happened in 2011 should again happen in 2015, by the grace of God, the dog and the baboon would all be soaked in blood.” Even his victorious 2015 presidential campaign was prosecuted with revolutionary credo. In fact, a simple scan of the internet still shows many sites and incidents relating the president to revolution, including a Face Book page boldly christened “The Buhari Revolution”. Of course, there were some calls for Buhari’s arrest, but President Jonathan recognized that the Constitution guarantees the former military dictator freedom of speech.

The problem, however, is that upon gaining the power, Buhari did not, and still does not, seem to remember why he was elected. For example, while the history will cast Goodluck Jonathan as the president who condoned corruption, Buhari might eventually be remembered as the man who assumed power with a singular purpose to eradicate corruption but ended up as the most shameless promoter of corruption in the annals of national existence.

Today, acute corruption and crass impunity are the other of the day. Today, the ruling party has as its chairman a virally corrupt and morally bankrupt figure who goes around brandishing the party as a sanctuary for treasury looters. Today, notorious corrupt kingpins standing trials at various courts are being recycled as ministers in nation of abundant qualified manpower. Moreover, the degree of political, tribal, ethnic, social, and religious divisions in the country is unrivalled in the national history, thanks to the prevailing naked injustice under Buhari. In short, things are truly falling apart. Not only is the president leading a visionless regime, he can no longer claim to have the capacity to guarantee the safety of lives and properties of the Nigerian people, let alone being able to cater for the welfare of a deserving nation.

The truth is that the nation is deep crisis, with helpless citizens being kidnapped, maimed, and killed with reckless abandon. The situation has provoked some prominent organizations and figures, including royal fathers and former military leaders, to challenge the citizenry to defend themselves instead of depending on the failing state for protection.

Rather than toe the path of violence or emulate Buhari’s incendiary style, Omoyele Sowore called for a peaceful revolution with the goal to awaken an unresponsive government towards change. Unfortunately, similar to the pattern under military dictatorship, the president ordered the arrest of Sowore, naively claiming that the word revolution suddenly translates to only a call for an overthrow of government. But if Buhari’s new vision of revolution is not stark hypocrisy, one can then come to terms on why he toppled Shagari’s government which had Green Revolution as a cardinal policy. He might as well occasion the arrest of the Leader of APC, Bola Tinubu, and many well-documented Nigerian presidential aspirants or candidates, including Buhari himself, who pitched revolution as a rally call for action in their quest for power. From his prison cell, Mr. Buhari can be at the liberty to dial US President, Donald Trump, to quickly arrest a current Democratic presidential candidate, Senator Bernie Sanders, whose campaign theme is “Our Revolution”.

The Sowore saga is simply a case of hyper-hypocrisy, but the crisis conundrum is that Muhammadu Buhari does not listen. In a widely celebrated essay, “Buhari And Nnamdi Kanu Fighting The Wrong Enemies”, I had cautioned the president during his first tenure that “fighting the right causes through the wrong courses usually creates more problems than solutions.” Today, Kanu and Indigenous People of Biafra (IPOB) have only grown worldwide by leaps and bounds, and the toll on national economy continues to mount. As he begins his second term, President Buhari needs to equally understand that Nigeria’s problem is neither Omeyele Sowore. The true problem is the failure wage a true fight against corruption; failure to lead a just, transparent, and responsive government; the failure to protect the lives and property of ordinary Nigerians; and the failure to be president for all. The solution is true change. The president can begin with atonement and immediate and unconditional release of Sowore. Anything less only goes to worsen the growing crisis.

SKC Ogbonnia, 2019 APC presidential aspirant, is the author of the Effective Leadership Formula.

Professor Lumumba Should Key Into This

Pythons, Crocodiles and the Nigerian zoo

AS APC 'BRINGS’ORDER FROM CHAOS

230 thoughts on “Sowore And Revolution: As Buhari Forgets Why And How He Became President”