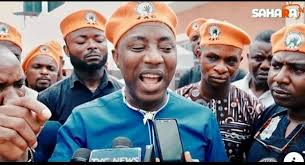 Onitsha, Eastern Nigeria, 22nd Nov 2019–By State or Political Repression, it is the act of a state entity controlling the citizenry by force for political reasons, particularly for the purpose of restricting or preventing their ability to take part in the political life of a society thereby reducing their standing among their fellow citizens. By State Terrorism, it refers to acts of terrorism conducted by a state against its own citizens. State terrorism comprehensively involves illegitimate policies and conducts and other illegalities and atrocities perpetrated by a sitting government against unarmed, defenseless and unprotected citizens of particular social grouping(s), all done outside the international norms friendly laws; perpetrated for hate, repressive, racial or ethnic, political and religious purposes. State terrorism and repression are the axiom of state persecution.


It is therefore safe and correct to say that the Government of Buhari and Osinbajo is speedily transforming, if not already transformed Nigeria into a rogue state of international spitting. Sadly and un-repentantly, it is the same State Security Service, SSS, which is again leading Nigeria to infamous path of perdition. In the dark days of the military, it was the same SSS then called NSO that led the country into a disastrous path.

The heaps of dent that dotted the secret service in those years forced its half-baked reforms and split into the now State Security Service, the Directorate of Military Intelligence and the National Intelligence Agency. That was in 1986 under the National Security Agencies Degree (Act). But as ‘a cleaned pig’, it immediately jumped back into its stagnant and dirty water under the Abacha’s inglorious epoch and was used deviously and atrociously to cage, molest, terrorize and ‘disappear’ countless of defenseless citizens and blacken the country. Today, the Service is at it again with utter and brazen ferocity!

While its international secret service colleagues such as Israeli MOSAD, Canadian Security Intelligence Service, South Korean National Intelligence Service, Japan’s Special Higher Police, Russia’s KGB, American CIA, British M16, and even South African Secret Service (SASS), etc have substantially made their countries proud in matters of ‘man-mental-machine intelligence’ and protection of their countries and nationals from internal man-made disasters, threats and other unsafe conditions including unmasking the unknown and recording great breakthroughs, the Nigerian SSS has continued to rigmarole in absurdities and frivolities; reducing itself to the status of ‘plain-clothed gendarme of a tyrannical regime of a failed African State’.

We therefore, condemn strongly the continued detention beyond the law of all defenseless citizens arbitrarily and repressively arrested and held in perpetual captivity in Nigeria or any part thereof. Readily in our mind are the trio of Omoyele Sowore, Agba Jalingo and Olawale Bakare. The recent ordeal including arbitrary arrest and long detention without trial of Citizens James Abiri and Stephen Kefas, among others are also strongly and unreservedly condemned. They have been in and out of police and prison custodies for several months. They are also victims of state torture. The risen and raging state terrorism and repression in Nigeria must therefore be fought to a standstill by all and sundry.

In solidarity, we totally support and commend the designation on 20th Nov 2019 by Amnesty Int’l of the trio of Omoyele Sowore, Agba Jalingo and Olaware Bakare as ‘the Int’l Prisoners of Conscience’. Courtesy of Peter Benenson (31st July 1921-25th Feb 2005) on 28thMay 1961, ‘Prisoners of Conscience’ are arbitrarily arrested and imprisoned nationals or citizens, arrested and imprisoned on the grounds of their race or tribe, sex orientation, religion or political views especially when they have never used or advocated violence. We make bold to say that this is an international recognition well deserved.

Similarly, the recent ‘arrange’ street and placard protests against Mr. Femi Falana, SAN, are both condemnable and commendable. The protests are strongly suspected to have been oiled by the authorities of the country’s security forces. Condemnable because it is a clear case of double standard and height of intolerance on the part of the Federal Government; the same Government that unleashes repressive and arbitrary measures to muzzle dissenting voices and stifle civil space. It is commendable because it is an indication of democratic free speech even though it is suspected to be governmentally oiled.

The Buhari and Osinbajo Government has since August 2015 unleashed state terrorism and repression on innocent, unarmed and defenseless citizens including bloggers, journalists, lawyers, human rights, religious and ethnic activists. Thousands have been killed and multiple thousands of others maimed with live bullets. Hundreds have disappeared and remained unaccounted for till date. The number of torture victims is also in multiple thousands. Thousands have been arbitrarily arrested and detained without fair trial and other custodial liberties.

While innocent, unarmed, defenseless and un-protected citizens are violently tracked, molested, tortured, maimed, terrorized and mowed down; thousands of terrorists who wrecked havoc and are still wrecking including massacre of innocent Nigerians in their several thousands are ‘pardoned’, ‘repented’ and conscripted into the security forces, the terrorist Fulani Herdsmen are rewarded, red-carpeted and presidentially dined with, a sort of reward for massacring tens of thousands of defenseless Nigerians since mid 2015.

Religiously speaking, the Shiite Muslims have lost over 1300 members and have thousands of others tortured or maimed or incarcerated without trial or disappeared without traces. Ethnically, over 480 members of Igbo Ethnic Nationality and others from their neighboring nationalities have been killed with over 500 others maimed or crippled for life. Scores have disappeared without traces till date and between 800 and 1000 others were arbitrarily arrested, detained and slammed with trumped up charges, marred by withdrawals, discontinuations, dismissals, etc, all for want of evidence.

The arbitrarily arrested and repressively held and accused citizens were further made to face false and spurious accusations ranging from ‘cyber stalking’, ‘terrorism’ and ‘terrorism financing’ to ‘treason’. The central Government and some States have since mid 2015 targeted human rights defenders, journalists, bloggers and other dissenting voices. The named laws created to tackle violent entities and armed opposition groups have been turned upside down and used or targeted at defenseless critics and other law abiding citizens.

Court orders are disobeyed with reckless abandon particularly by the SSS, Police and Military. Constitutional provisions are lowered below obnoxious legislations that are grossly inconsistent with the Constitution. By Sections 1 (3) and 315 of the 1999 Constitution, for instance, all other laws or Acts or deemed Acts of the National Assembly and Laws passed by States Houses of Assembly are subject to the provisions of the Constitution, but in practice and under the present Government, such constitutionally inferior laws are made supreme above the Constitution.


Despite the clear inconsistencies of Sections 27 and 28 (4) of the Terrorism Prevention Act of 2011 (amended in 2013) with Section 35 (4) of the 1999 Constitution, the Attorney Gen of the Federation and Federal Government of Nigeria have refused to have the inconsistent and obnoxious provisions repealed or brought in conformity with the Constitution. Section 27 of the Terrorism Prevention Act unconstitutionally empowers police and other security officers to arrest and detain citizens on grounds of ‘terrorism’ for 90 days, renewable permanently until ‘investigation or prosecution is concluded’.

Section 28 (4) also unconstitutionally empowers them to place citizens suspected of ‘terror’ under house arrest and be monitored and have their phones seized; if granted bail within the 90 days of solitary captivity until investigation is concluded. These are contrary to Section 35 (4) of the 1999 Constitution which clearly states that ‘if a citizen is arrested on suspicion of any offense carrying capital punishment including terrorism, he or she may be detained without bail and for purpose of investigation for not more than 60 days; or 90 days if already released bail; and that if he or she is continued to be suspected or investigated without trial, he or she shall be released unconditionally or be put in reasonable and humane condition that will ensure that he or she is available for trial when needed, but certainly not under custody anymore.

We hereby join Amnesty International in calling for the release of the trio Prisoners of Conscience. Democratic speeches or opinions expressed on the basis of political, religious, ethnic and societal decency and uprightness have never and can never constitute acts of ‘treason’/‘treasonable felony’, or ‘terrorism’, or hate speech’ or ‘cyber stalking’. Perpetrators of State terrorism and repression in Nigeria must not be allowed to assume the role of a wicked mother or father that beats a child or minor and forces him or her not to cry.

8 thoughts on “Sowore & Ors: State Terrorism & Repression Under Buhari & Osinbajo Must Be Fought To A Standstill”