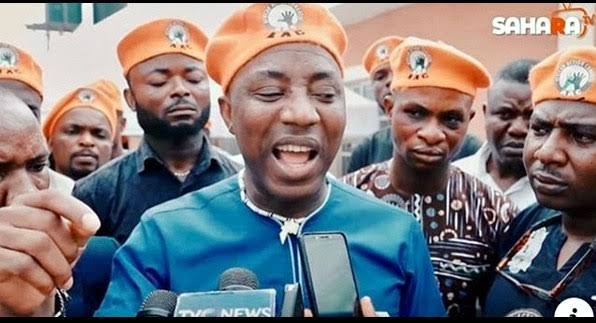 Socio-Economic Rights and Accountability Project (SERAP) has sent an open letter to Mrs Soyata Maiga, Chairperson of the African Commission on Human and Peoples’ Rights and the commission’s members requesting them: “to urgently intervene and put pressure on the Nigerian authorities and their agents to immediately end the intimidation and harassment of detained journalist and activist Omoyele Sowore and Olawale Bakare, their sureties and lawyers, particularly Femi Falana, SAN simply for defending their clients’ rights.”

According to SERAP, “Nigeria’s State Security Service (SSS) has stated that it would not release the activists until it is allowed to vet sureties that have already been verified by the court, implicitly harassing the sureties apparently with the aim of pushing them to disown the detained activists. Similarly, a group of apparently sponsored ‘protesters’ calling themselves ‘Save Nigeria Movement’ asked Femi Falana to ‘stop intimidating security agencies.’”

In the petition dated 22 November 2019 and signed by SERAP deputy director Kolawole Oluwadare, the organization said: “The harassment of detained activists for demanding strict compliance with court orders, and then their sureties as well as lawyers who come to their defence, shows a steady slide away from the rule of law and underscores the urgent need for the Commission to insist on the restoration of respect for human rights in Nigeria.”

SERAP also said: “The harassment is emblematic of a broader pattern of official threats to and harassment of Nigerian civil society. We are concerned that rather than releasing Sowore and Bakare as ordered by the court, the Nigerian authorities are now implicitly intimidating the activists, sureties, and lawyers, particularly Femi Falana.”

The letter copied to Mr. Diego GARCÍA-SAYÁN, UN Special Rapporteur on the independence of judges and lawyers, read in part: “Apparently sponsored attacks, harassment and intimidation of sureties and lawyers for doing their independent duties undermine and erode the integrity of the legal profession, access to justice, Nigerians’ confidence in the courts, and make a mockery of the entire justice system.”

“The harassment is emblematic of a broader pattern of official threats to and harassment of Nigerian civil society. SERAP is seriously concerned that rather than releasing Sowore and Bakare as ordered by the court, the Nigerian authorities are now implicitly intimidating the activists, sureties, and lawyers.”

“SERAP condemns the use of apparently sponsored protesters to harass and intimidate Sowore and Bakare’s lawyers particularly Femi Falana. The intimidation and harassment of Sowore and Bakare’s legal team is intended to, and will most likely lead to, other lawyers being unwilling to defend anyone facing politically motivated and high-profile prosecutions.”

“Sureties and lawyers are essential to ensure the effective operation of the justice system, and the rule of law; they need to be protected not harassed and intimidated. Lawyers ought to have the freedom to carry out their legal work and should never have to suffer any intimidation and harassment for discharging their professional duties.”

“These actions hinder the ability of lawyers to freely carry out their professional duties and severely restrict access to justice and fair trials for the detainees, with a consequent erosion of fair administration of justice, equality of arms, and the rule of law. By targeting the detainees’ sureties and lawyers, the Nigerian authorities are implicitly harassing and denying them their right to claim justice.”

“Sowore and Bakare were arrested simply for calling a national protest. Amnesty International has declared them prisoners of conscience detained solely for exercising their right to freedom of expression. Sowore, Bakare, their sureties and lawyers particularly Femi Falana continue to face hostility, intimidation and harassment.”

“As one of the main actors of an independent justice system, lawyers have an essential role to play in protecting human rights, in particular due process and fair trial guarantees, and ultimately contribute greatly to ensuring respect for the rule of law.”

“The UN Declaration on Human Rights Defenders affirms the right of everyone peacefully to oppose human rights violations. It prohibits retaliation, threats and other harassment against anyone who takes peaceful action against human rights violations, both within and beyond the exercise of their professional duties.”

“Similarly, the UN Basic Principles on the Role of Lawyers provide that governments are to ensure that lawyers are able to perform their professional functions without intimidation, hindrance, harassment or improper interference.”

“Further, the African Charter on Human and Peoples’ Rights to which Nigeria is a state party guarantees the right to freedom of expression; the prohibition of arbitrary detention and the right to a fair trial and due process of law. Nigeria is also a state party to the International Covenant on Civil and Political Rights, which in Article 14 guarantees the right of the clients of the concerned lawyers to an effective defense.”

“The SSS has stated that it would not release the activists until it is allowed to vet sureties that have already been verified by the court, implicitly harassing and intimidating the sureties and by extension, the detainees and their lawyers, particularly Femi Falana, apparently with the aim of pushing the sureties to disown the detained activists, and Mr Falana to withdraw from the suit. However, under Nigerian law, the SSS does not have any power to vet sureties.”

“Also, a group of apparently sponsored ‘protesters’ calling itself ‘Save Nigeria Movement’, asked Femi Falana to ‘stop intimidating security agencies.’ The group recently held a rally in Abuja to say ‘enough is enough’ to Femi Falana. The group held up banners conveying their remonstrances such as—’Falana stop blackmailing Nigerian military’ and ‘Falana enough is enough’.”

SERAP therefore urged Mrs Maiga and the commission’s members to urgently put pressure on the Nigerian authorities to: