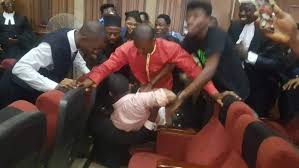 The Nigerian Bar Association (NBA) has called for the suspension of the Director General of the Department of State Services, (DSS), Yusuf Bichi.

The umbrella body of lawyers said this while condemning the invasion of a Federal High Court in Abuja by armed officials of the DSS.

Following the invasion of the courtroom, the trial judge, Justice Ijeoma Ojukwu adjourned the matter till February 11, 12 and 13 for definite hearing.

This is coming less than a day after Sowore was released by the DSS after an Abuja Federal High Court ordered for his release within 24 hours.

However, NBA in reaction, said it was disgraceful that the ‘court riot’ occasioned by the high handedness and insensitivity of the security operatives interrupted judicial proceedings and made the Presiding Judge to abandon proceedings because of safety concerns.

The body further called on the National Assembly to review the laws setting up the DSS and all security agencies in Nigeria, with a view to repositioning them to be more responsible and responsive to the public.

A statement from NBA’s official Twitter page reads, “The Nigerian Bar Association is greatly dismayed at the exhibition of primitivity, thuggery, insane passion for lawlessness, contempt and disrespect for the rule of law by the agents of the Department of State Services (DSS) within the precincts of the Federal High Court, Abuja while attempting to re-arrest Citizens Omoyele Sowore and Olawale Bakare.

“The NBA has been properly briefed – beyond the shameful videos of the incident in public domain- by our members who witnessed the disgraceful and crass violation of the hallowed precincts of the law by the officers of the Department of State Services, an agency of the Federal Government of Nigeria.

“The Nigerian Bar Association strongly condemns the action of the Department of State Security, which is another in the series of impunity and lawlessness exhibited by the DSS. The invasion of the court by the agency of the Federal Government of Nigeria runs contrary to the avowed assurances of the President of the Federal Republic of Nigeria that he will ensure that the Federal Government and agencies under it obeys court orders. The disrespect of the court by the DSS is legendary and unrivalled.

“Few days ago, the officers of the Nigerian Police Force exhibited similar traits when it also invaded the precincts of the High Court, Effurun to arrest Mr. Ademi-Akpeto, Chairman of Sapele branch of the NBA. Many Nigerians are still in unlawful custody and not charged to court. Nigerians are now under siege by security agents who have no regards for the law and the courts.

It also demanded that the Attorney General of the Federation, take over all the political cases or case involving politically exposed persons presently handled by the DSS.”S

World Bank President to SERAP: Our role in the spending of Abacha loot was limited