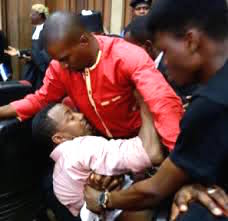 For a hundred days, Nigerians were glued to their television sets watching Big Brother Nigeria which Mercy Eke won making her the first female to win the widely viewed show. Most Nigerians don’t care about the history of how Big Brother came about. This isn’t surprising as history was removed from the educational curriculum many years ago and was only just returned back there.

For the records, Big Brother was used in a book, 1984 written by the master satirist and British writer, Eric Blair who was more known with his pen name George Orwell. It was used to describe how the government monitored the activities of all its citizens in a fictional state and how mass murders and kidnappings occurred in that state which according to critics was used to depict life in the now defunct Union of Soviet Socialist Republics (USSR) especially under the dictatorship of Josef Stalin.

This same concept has now been entrenched in our dear Nigeria as the government governs without any form of adherence to the rule of law and respect for court orders.

Anti-corruption crusader and human rights activist, Omoyele Sowore was released after spending over four months in the DSS custody on the 5thof December, 2019. Barely twenty-four hours later, he was rearrested by the Department for State Security (DSS) in a Gestapo like manner similar to the tactics used by street hooligans and thugs. The officials stormed the court putting fear into the hearts of the lawyers and the presiding judge, Justice Ijeoma Ojukwu had to scamper into the inner chamber of the court for safety.

Human rights activists both at home and abroad roundly condemned this action by the DSS who are funded with tax payers money and are supposed to uphold the ethos of decency in all their dealings. The widely circulated video showed the use of brute force by the DSS which was indeed a monumental shame to all Nigerians whether at home or in the Diaspora.

The DSS in a farcical face saving attempt issued a press release where they ‘stated their own side of the story’. A copy of it was gleaned from the Thisday newspaper and it read:

It has become important that the Department of State Services responds to the serial misinformation being circulated in the media about its involvement in the incident that occurred on 6th December, 2019 at the Federal High Court, Abuja. It is instructive to note that during the court proceeding of the day under reference, Defence Counsel, Femi Falana (SAN), called the attention of the Judge to a suspicion that the Service was planning to re-arrest Omoyele Sowore immediately after the court session. The Court discountenanced his alarm and asserted that the Service was law abiding and would not engage in such and subsequently adjourned to February, 2020.

“However, when Sowore stepped out of the court and sighted operatives of the Service within the premises, he ran back into the courtroom. In a bid to shield him from an imaginary arrest, his uncontrollable supporters mobbed him while chanting “you can’t arrest him” thus the pandemonium that ensued.

“A critical look at the videos in circulation would convince any objective viewer that there was no DSS personnel during the entire period the Sowore crowd acted out its orchestrated drama. Its personnel were never, at any time, involved in the incident. In actual fact, it was his people who seized him. And from the latest developments, it has become obvious what the intent for such mischief was meant for – simply to serve a propagandist purpose as well as bring the Service to disrepute.

“Eye witness and several media accounts have disclosed that the Court had adjourned peacefully without an untoward incident when suddenly the unruly crowd imported into the Courtroom went into frenzy on the mere suspicion that DSS was sighted at the court premises. The eventual re-arrest of Sowore by the DSS was effected outside the courtroom. His lead counsel has affirmed this.

“The DSS, as a professional, responsible and law abiding Organization, could not have invaded a courtroom including the one presided over by a respected Judge who is not only handling its case but whose Order was unconditionally obeyed within a 24 hour ultimatum. The Service holds the judiciary in utmost respect and will continue to work with it for national peace and public safety in Nigeria.

“It has therefore become unarguable and raises a moral question as to who, between Sowore and the Service, dislikes or disobeys the Courts. In this regard, public attention may be drawn to the 25th July 2019 statement of Sowore that “I’m not talking of protest. I’m embarking on revolution… Don’t tell me about legal implications or what a Judge will say. I don’t care …” On 5th December when Sowore was released, he had, at the Transcorp Hilton Hotel, Abuja addressed a group of persons who, he reassured of his cause to create anarchy in the country.

“It may be recalled that the Service had on 3rd December, 2019 raised alarm about a plot to destabilize the country. It is quite remarkable that the plot has already started playing out. To ensure this objective is further achieved, some persons and groups are scurrying to seize the opportunity of the misleading court incident and the wrong narrative against the DSS to organize an insurrection in the country. They have continued to falsely curry and mobilize international sentiments and attention, through clear misrepresentation of the facts, for their selfish ends.

For emphasis, it should be noted that Sowore is facing trial not as an activist, journalist or a politician, but for his resort to call for violence, forceful takeover of government and suspected transnational illegal activities. It is most unfortunate that Sowore, shortly after being released from custody, based on court order, resorted to acts inimical to security. To this effect, only Sowore has been re-arrested as his co-defendant, Olawale Bakare, was not picked up even when Falana had promised to deliver him to the Service that is not presently interested in him.

Though sections of the populace have been fed with spurious narratives about these developments, Nigerians and the International Community should not be gullible or even vulnerable to the machinations of groups desirous of misleading them.

The Service is committed to the discharge of its mandate of detecting and preventing threats against the internal security of Nigeria. It supports democracy in the country and will do all that is legal to protect it. It will also ensure that efforts of anti-democratic forces are frustrated.

Peter Afunanya, Ph.D
Public Relations Officer,
Department of State Services,
National Headquarters,
Abuja
This rebuttal is rather ridiculous from the DSS as the video of their sheer brutality went viral and their weak response didn’t debunk the veracity of the video. It is sad that Nigeria has descended to the bestiality of disrespecting the rights of the critics of the administration and abuse of the rights of journalists. How is the fourth estate of the realm going to be able to hold the government in power accountable if it operates in a climate of fear?

The officials involved in the shameful saga should be severely punished and the DSS owes Sowore, Bakare and all Nigerians an unreserved apology for its uncalled for actions as it was done in extremely bad taste.

Nigerians should not be slaves in their motherland as they have the right to freedom of speech especially when the government who is supposed to serve them errs.

We chant in unison a loud nay to the days of Egypt when journalists and human rights activists were treated worse than dogs. What manner of democracy is this?