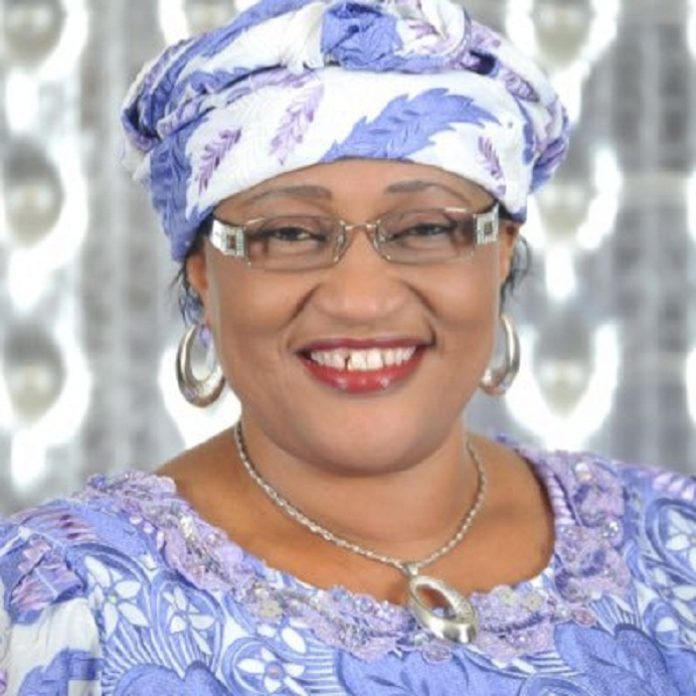 The Chair,
Distinguished Panelists,
Delegates,
Ladies and Gentlemen.
Let me welcome you all to this important Side Event on: a�?Achieving Economic Empowerment: Addressing Women, Peace and Security Issues as a Pathway for Socio-economic Independence for Rural Women in Nigeriaa�? which is holding at the fringes of this 62nd Session of the Commission on the Status of Women. The topic of this Side Event has been carefully chosen to showcase Governmenta��s efforts at delivering locally developed and nationally implemented social intervention initiatives to revive the economic situation of citizens by integrating WPS issues into strategies for improving human security levels in the country with which without security (security) there can never be development.

2. It has been variously described that women constitute more than half of the roughly 180 million Nigerian population, yet they play a second role in all sectors of the economy. Therefore, addressing women peace and security issues in rural areas is germane to achieving economic independence, social inclusion and development generally. This is because women remain important economic power blocks waiting to be tapped in the quest for sustainable development and attainment of globally agreed goals and targets enshrined in the SDGs Agenda 2030 and AU Agenda 2063. Women are endowed with limitless acumen, indigenous knowledge and vast entrepreneurial skills that are yet to be fully deployed as means of diversifying and catalyzing economic growth, if national development is to be transformative and impactful.

3. The experiences of women living in rural areas are disparate, making their needs diverse and reflective of the different contexts and issues they face. Similarly, the experiences of women confronted by conflict situations in rural areas vary significantly from those living in non-conflict situations. One of the major challenges of conflict affected rural communities is the advent of gender role change which often has consequences on womena��s burden as they take on more dependents and assume greater domestic and community responsibilities.

4. Nigeria has witnessed her fair share of global terrorism and strife ranging from insurgency in the North-East to oil bunkering and vandalization in the South-South to the more recent nefarious activities of cattle rustlers resulting in incessant farmers-herdsmen clashes in some parts of the country. The attendant consequences of these disruptions usually manifested not only in the loss of lives and means of livelihood, but total dislocation of educational systems and economic activities with women, girls and youth always at the receiving end.

5. The net results of the aforementioned development are the constraints usually imposed on free mobility of people, goods and services; infrastructural dislocation, diminished social services and reduced access and weakened distribution network for agricultural inputs and trade. Women and girls living in rural areas have in addition been exposed to increased security risks including heightened threats of Gender-Based Violence (GBV), abductions, rape and other forms of sexual violations.

6. It is within the context of addressing all the above socio-economic challenges that Nigeria rolled out its 2nd National Action Plan on UNSCR1325 (NAP), which provides an overarching framework and five strategic pillars for addressing specific WPS concerns both in conflict, non-conflict and post-conflict situations. Within its clusters is the Zonal Action Plans (ZAPs) that highlight regionally specific WPS issues applicable to each of the six geo-political territories of the country. Drawing on the experiences of both the NAP and ZAPs, States are developing their own State Action Plan (SAP) and in some cases Local Government Action Plans (LAPs), that align significantly with the National and Zonal action plans. In so doing, each state of the Federation has outlined its own priorities and unique way of responding to WPS issues within its State security architecture. This has become the Nigeria model for addressing emerging security issues, social gaps and new dimensions to WPS concerns captured in the NAP such as insurgency, terrorism, violent extremism and radicalization of citizens to mention a few. Also, WPS National Technical Advisory committee has been established to provide oversight to the NAP implementation and stimulate the creation of enabling environment to pursue womena��s peace priorities and agenda.

7. Given the need to adequately respond to the humanitarian challenges faced by over 1.5million women and girls living in rural communities affected by the Boko Haram insurgency, the Government of President Muhammandu Buhari is implementing a strategic national action plan, founded on robust social protection initiatives, to facilitate adequate response to the situation. This is complimented by strategies to improve security in the North East and accelerate recovery and re-integration from a gender perspective. The NAP is also providing credible support plan for the comprehensive and nationally integrated a�?Buhari Plan of Actiona�? for the reconstruction of the NE in a sustainable development manner.

8. In addressing the security and social dimension of the challenges imposed by the insurgency, a multinational and multi-agency approach tagged a�?Operation Safe Corridora�?, has been adopted to effectively handle the de-radicalization, rehabilitation and reintegration of willing and surrendered Boko Haram members into the society. As at date, about 70 insurgents have willingly surrendered to the military while some 700 others have indicated interest to surrender demonstrating commitment towards genuine peace and reconstruction of the North-East. It is instructive to acknowledge the profound support and partnership being provided by a cohort of humanitarian partners, development agencies and members of the CSOs who have responded to various governmenta��s various initiatives by providing humanitarian relief, financial, economic, educational and psychosocial support for victims and displaced persons

9. Ladies and Gentlemen, I cannot conclude without highlighting the following significant progress made in four of the Social Intervention Programmes (SIP) currently being implemented in the country:

First, The implementation of our (N-Power) job Creation and Youth Employment Programme which targets gainful and sustainable employment of 500,000 graduates and 100,000 non graduates as solutions providers and players in the domestic and global economy has taking off successfully in the country. Consequently, 200,000 N-Power graduates have been successfully deployed to serve local communities in the country with another batch of 300,000 graduate volunteers already pre-selected. This batch will help to boost and improve the quality of service delivery in the agricultural, health and teaching sectors of rural areas. Also, an audit of the additional 10,000 artisans to be trained in the construction and automobile space, in close collaboration with the Council of Registered Builders of Nigeria and the National Automotive Design and Development Council, is ongoing.

Second, the implementation of the Conditional Cash Transfer (CCT) programme, aimed at providing 1 million poor and vulnerable households, with N 5,000 monthly cash transfers in order to graduate them out of poverty, is progressing. As at December 2017, over 622,649 Identified Poor and Vulnerable House Holds have been enlisted in the programme with over 439,859 captured in the National Social Register (NSR) from 233 LGAs across 23 States. Of these figures, 293,973 caregivers from 9,567 communities have been paid, with over 25,000 beneficiaries already accessing requisite skills through trained community facilitators. To facilitate its transparent and hitch free implementation, a National Social Register (NSR) is being created through tested community-based targeting methods to minimize errors.

Third, The Home Grown School Feeding (HGSF) programme designed to provide one nutritious meal a day to 5.5 million school children, including girls in classes 1-3 of public primary schools, in rural communities, with food locally grown by farmers has witnessed tremendous enrolment rates with the mopping up of over 10.5 million children currently out of school. By December 2017, 6,044,625 pupils are being fed daily in 20 States by 61,352 cooks in 33,981 primary schools. The programme has trickled down financial incentives to local dwellers as cooks, mostly women, have been linked to the school feeding market with male and male farmers alike assured of regular incomes for their produce.

Fourth, The Government Enterprise and Empowerment Programme (GEEP), also known as a�?Market Monia��, designed to provide $1.66 million micro credit lending to businesses at the bottom of the financial pyramid a��i.e. traders, women cooperatives and market women; enterprising youth and farmers has continued to create array of entrepreneurs in the country. The soft conditions of zero collateral and 5% administrative fee attached to the loan has resulted in the disbursement of a totalled $259,451 Loans to direct beneficiaries as at December 2017. Currently, separate applications are being processed for 478,388 eligible beneficiaries. A special window within the GEEP is the National Women Empowerment Fund (NAWEF) dedicated to supporting grassroots women operating informal businesses. To date, an aggregate disbursement of about $1.56 million has been made to eligible women in six pilot States and beneficiary verification is still on-going in many of the States.

Fifth, The Science Technology, Engineering and Mathematics (STEM) Bursary Programme is a bursary initiative to provide financial support to students studying Education, Science and Technology, Engineering and Mathematics. Young women and girls especially those from poor rural areas are part of the major catchment segments of society for the programme.

Sixth, The advancement of application technology is also considered to be a critical service delivery tool and Plans have been concluded to to establish eight innovation hubs across the country in order to extend technology to rural communities and reposition them to participate fully in the digital economy. To this end, the Adamawa Humanitarian Innovation Hub known as the North East Makeathon was opened in the last quarter of 2017, while the Lagos Climate Change Hub, which is to facilitate ideas on renewable energy and the reduction of pollution, is commencing this month.

Lastly, in order to economically empower and transform the lives of those living in rural areas especially women who are predominantly farmers, the Agricultural Transformation Agenda (ATA), is geared at strengthening the agricultural value chain, achieving a hunger-free nation, accelerating food and nutritional security, generating employment and growing wealth for millions of farmers. Similarly, the current Anchor Borrowers Programme of the Federal Government has released over $122million to farmers through 13 accredited institutions to spur the production of additional 2m tonnes of rice in 2018 by 300,000 Rice Farmers comprising men and women often in rural locations. Also, implementation of the Community Peace Building project has commenced in the North East and an agro based intervention has been launched to economically empower households through agricultural support.

Distinguished Ladies and Gentlemen, 10. Against the back drop of these achievements and bold strides to economically empower women and girls exposed to conflict, I hope our deliberations at this event will provide the platform to discuss more extensively and share perspectives on workable strategies and innovative approaches for addressing women peace and security issues in Nigeria. This will no doubt help to stimulate the economic empowerment and independence of rural women who remain the back bone of societies and agents for reducing poverty and hunger. I would therefore like to urge partners and stakeholders to come on board and support the implementation of the NAP as the plan remains a veritable tool for promoting sustainable peace and economic development.

Buhari Rested During FEC Meeting On The Advice Of His Doctors, Lai Mohammed Says