Spurs 3-1 Chelsea: Sarri “didn’t like anybody” on Chelsea on Saturday

Spurs 3-1 Chelsea: Sarri “didn’t like anybody” on Chelsea on Saturday 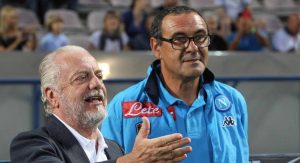 A reporter tried to give  Maurizio Sarri  a silver lining to Chelsea’s miserable 3-1 loss to Tottenham Hotspur on Saturday by asking about  Ross Barkley ‘s late play off the bench.

Chelsea was second-best in every area at Wembley Stadium, a fact emphasized by  Heung-Min Son ‘s torching of  Jorginho ,  David Luiz , and  Kepa Arrizabalaga  en route to Spurs’ third goal of the afternoon.

The goal effectively sealed Chelsea’s first loss of the season in all competitions, and boosted Spurs above their London rivals.

“I am disappointed because we played very badly. I think we played very badly in all directions – physically, mentally, technically and tactically. I knew we had some problems and with this performance today it was clear to everybody we have problems to solve. I think in the last three or four matches we have started not really very well.”

Chelsea has a chance to find its form with consecutive home matches against PAOK in the Europa League and Fulham in the PL.

Tottenham inflicted Chelsea’s first loss in the English Premier League with a rampant performance in a 3-1 win at Wembley Stadium on Saturday.

Dele Alli, Harry Kane, and Son Heung-min scored for Tottenham, which jumped above its London rival in the standings into third place.

The sight of Chelsea holding midfielder Jorginho clutching at thin air as Son outpaced him to score Spurs’ third goal in the 54th minute – and his 50th goal for the club – was a fitting image, with Tottenham quicker to everything in an unexpectedly one-sided derby.

Chelsea, which scored a late consolation through substitute Olivier Giroud, came into the game as one of three undefeated teams in the top flight, along with Manchester City and Liverpool.

On a day when the top two enjoyed big away wins, Chelsea dropped seven points behind first-place City as frailties in Maurizio Sarri’s side were exposed, especially in defense.

”The scoreline should have been a lot more with the chances we had,” said Alli, who was probably referring to Kane lifting a shot over the crossbar from close range when the score was 3-0.

Tottenham has been scraping wins of late, mostly by a one-goal margin, but Mauricio Pochettino’s team looked a different side with the attacking-midfield trio of Christian Eriksen, Alli and Son positioned behind Kane.

Eriksen swung in the free kick that was headed in by Alli in the eighth minute and Kane doubled the lead in the 16th from outside the area, with Chelsea defender David Luiz turning his back as the England striker took aim.

Son’s goal came when he was set free down the right by Alli’s curling pass. The South Korea forward cut inside past Jorginho and drove a low shot into the corner.

It was a 10th win in 13 games for Tottenham, which is five points off City.

Report: Chelsea up for sale at $2.5 billion

11 thoughts on “Spurs 3-1 Chelsea: Sarri “didn't like anybody” on Chelsea on Saturday”