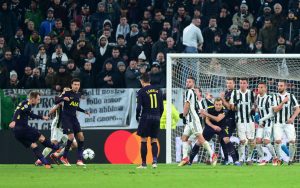 T he new stadium of steel and glass in Turin that Juventus call home these days is where even good teams have the hope squeezed out of them, which only makes what Mauricio Pochettino’s young Tottenham Hotspur side achieved that much more remarkable.

They were two goals down within nine minutes, both dispatched by the ruthless Argentine marksman Gonzalo Higuain in what seemed like a swift prelude to Juventus locking the front door and declaring the shop closed as one might expect of a team that had not conceded a goal since  Dec 30.

Not only did Spurs respond with two priceless away goals to seize a draw in this Champions League round of 16 first leg but they set out their stall in a manner that no-one who watches football here is accustomed to.

The possession count was significant, the needle wavering at around 70 per cent for Spurs until the closing stages and none of it was in vain when first Harry Kane scored on 35 minutes and then Christian Eriksen drove in a free-kick for the equaliser as the clock ticked down. There were moments when Spurs might even have won the game but at the very least they go back to Wembley on  March 7  with a good chance that they will eliminate one of the competition’s best sides.

They did so despite conceding two first half penalties, the first of which Higuain scored and the second he missed, and it would be true to say that these moments betrayed a vulnerability that might give Juventus some hope. It was in midfield that the inequality was most glaring with Mousa Dembele in particular a pivotal figure who ran the game in the way in which Juventus’ most celebrated playmakers are accustomed to doing.

T he last kick of the first half felt like it could have been decisive but instead Gonzalo Higuain, contemplating a first half hat-trick, and on his second penalty of the game, struck a shot so fiercely against Hugo Lloris’ bar that the referee had blown for half-time before it even landed.

It had been a remarkable first half, and it seemed like it would end with Juventus re-establishing the two-goal lead they had taken within the first nine minutes. Spurs crumbled in those opening exchanges, rather as Manchester United had done against them two weeks ago at Wembley and then when it looked as if a humiliation could be on the cards, Pochettino’s side came back.

B y the end of the half it was hard to separate the foolishness of the two challenges that had given Higuain his two penalties from the impressive nature with which Spurs had dominated the game in between the two spot-kicks. When Higuain had buried his second goal from the spot following Ben Davies silly challenge on Ferdicio Bernardeschi this looked like the moment when Pochettino’s side had reached their limits but they came back into the game beautifully.

They did so in a way that very few teams are permitted to do in the Juventus Stadium, with Mousa Dembele running the midfield for them and the home side pressed up in their own half and being inched back in much the same way as Arenal were at Wembley  on Saturday. When Dele Alli played in Kane to go round Gianluigi Buffon with his right foot and finish from out on the left with his left, it was the first goal scored by an away team at this stadium since  Nov 5.

J uventus are a formidable defensive side, especially at home and this was also the first goal they had conceded in 2018, and yet Kane should have scored before then. Christian Eriksen had chipped a ball in from the left onto the Englishman’s head on 26 minutes and he twisted to meet it perfectly, but only directed it straight at the old boy in the Juventus goal. Dembele had given Kane another sight of goal minutes before the Englishman struck, and Spurs were back in the tie.

They had conceded after 1 min 14 secs when a free-kick conceded by Dembele was chipped into the right channel by Miralem Pjanic and Higuain took it first time with his right foot, across and past Lloris into the far corner.

I t was a resounding finish and he might have got another before he struck his first from the spot. Lloris got a hand to that one but at two goals down and just nine minutes played it required some effort from Spurs to get back into it.

They had 78 per cent of the possession in the first half, a significant number were they playing West Bromwich Albion let alone one of the best clubs in Europe. They took risks too and Higuain almost scored on the breakaway when Erik Lamela was tackled running through on 30 minutes. Then with the score at 2-1 and the home crowd quiet Serge Aurier lunged in on Douglas Costa and referee Felix Brych awarded the second penalty of the evening.

E riksen’s equaliser came from a free-kick won by Alli who was fouled by Giorgio Chiellini on the edge of the area on 72 minutes. Eriksen struck it low to the left of the wall and Buffon, who had not been convincing all game, was slow getting down to it. At stages of the last ten minutes Juventus threatened but one could tell this is not how they are used to playing at home where they have lost just once this season, to Lazio, and by the final moments, Spurs had them pinned back again.

Pochettino brought on Lucas Moura for Lamela to give his side that extra threat, and then Victor Wanyama to keep it tight. It was very quiet in the stadium by the end of the night, and certainly what lies ahead for that second leg at Wembley promises to be a classic.

10:04PM
Pochettino says his players were amazing
a�?Of course today was a good example that the team is more mature, the capacity that we have, in a difficult moment the team was amazing in the way they react.

a�?I think the second half we play much better, the draw is good, a good point for us but a little unfair. We were talking a little bit but the comment at half time that maybe he was offside.

a�?[The return] will be difficult, the tie is open, Juventus is massive team, club and of course they want to win but we have to dream, hope we can beat in Wembley, our fans will be great and now we need to think and play the FA Cup with the hope the second leg we will be as strong.

Unbeaten Tigers a cut above the Lions