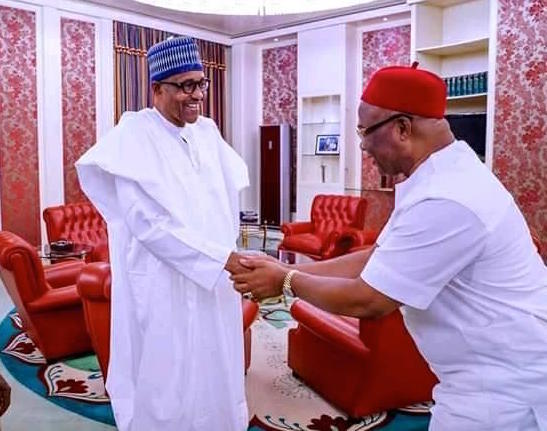 It was a gathering of who is who in Okigwe Zone yesterday, Sunday February 23rd, 2020 as Elders Council in Okigwe Zone, Political Leaders, Traditional Rulers, Academia, Head of Religious Organizations, Women and Youth leaders all assembled at the Umueze-1, country home of Chief Tony Chukwu (Onweghi ihe Kariri Chineke), to plot a way forward for the zone ahead of the forthcoming Imo North by-election, and to engender Peace and unity among sons and daughters of Okigwe Zone.

Before the commencement of the day’s activity, a minute silent was observed in honor of their departed Senator, Benjamin Uwajumogu.

Declaring the intent of the meeting, the convener and Chairman Okigwe Zone Elders Council said the meeting is simply for the zone to unite for peace and development, that without unity of purpose, there will be no meaningful development. Chief Longers Anyanwu raised the floor of discussion when he boldly said that the only problem Okigwe Zone had was the political rivalry amongst billionaires from Mbano extraction, stating that their disagreement and inability to come together had caused Okigwe Zone great fortune in terms of socioeconomic and infrastructural development. For Okigwe to move forward, Chief Anyanwu made it clear that all the leaders must come together and unite for the overall interest of the zone. The chief host, Chief Tony Chukwu who bared his mind, said the leaders of Okigwe Zone had made great mistakes in the past, stating that going forward, the leaders which he is among must forgo personal interest and work for the betterment of Okigwe Zone.

Onweghi ihe Kariri Chineke reiterated that, time has come for promising youths and young Okigwe sons and daughters be given a chance and be supported to move the zone forward. On the forthcoming Okigwe Zone Senatorial by-election Chief Chukwu said, “the choice of who will replace their late brother Senator Benjamin Uwajimogu would be a collective decision of Ndi-Okigwe Zone, that no one individual will decide.” Chief Chukwu emphasized that time has gone when one individual will dictate for Okigwe Zone who will go and represent them at the National Assembly. He said,” this time, not even himself Tony Chukwu, Senator Ifeanyi Araraume, Ex-Governor Ikedi Ohakim, etc, will decide who will go, rather a unanimous and collective decision of Ndi-Okigwe Zone. He made it clear that a credible young man or woman must be encouraged and supported to go to the Senate, not the old faces always justling for the Senate position everytime”

Hon Chike Okafor, prayed for the adjustment of the meeting agenda, proposing that Ndi-Okigwe should send a delegation to thank His Excellency, Senator Hope Uzodinma for appointing their zone, Chief Cosmas Iwu as the Secretary to the State Government and rally round their brother, Chief Iwu in solidarity. Okigwe leaders unanimously adopted his position and hailed Governor Uzodinma for finding their son worthy for appointment as Secretary to the Government of Imo State. They commended President Buhari also for appointing their son, Barr. Emeka Nwajiuba as minister of the Federal Republic of Nigeria.

For the forthcoming Okigwe Zone senatorial by-election, Okigwe leaders and stakeholders agreed to set up a committee to look into the issues and narrow down the number of aspirants who had interest for the position.

While declaring the resolutions of the leaders, after speech from Chief Cosmas Iwu, Prof Ossy Nwebo, Chief Fabian Ihekweme, Sir George Eguh, Rt Hon Acho Ihim, Engr Mark Uchendu, Hon (Mrs) Akubundu, etc, Barr. Ifeanyi Agwu read that Okigwe Zone have accepted to support Governor Hope Uzodinma led administration in Imo and will pay him a Solidarity Visit. That Okigwe Zone leaders thank Governor Uzodinma for appointing their son, Chief Cosmas Iwu as Secretary to Imo State Government. That Okigwe Zone leaders will forward a letter to President Muhammadu Buhari thanking him for appointing their son, Bar Emeka Nwajiuba as Minister of State Education. That Okigwe Leaders as a group will decide who will represent them at the forthcoming Senatorial by-election.