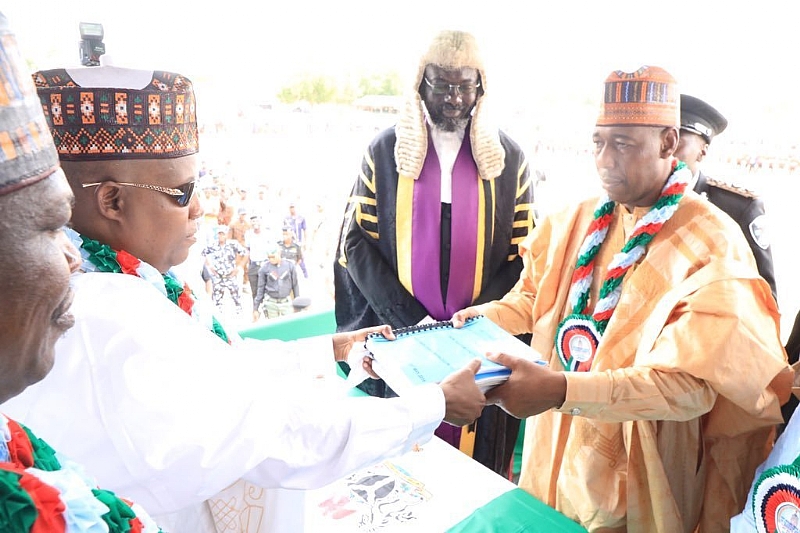 Concerned Youth Stakeholders in Borno State have appealed to Babagana Umara Zulum as a matter of great concern, transparency and accountability in governance to expidite efforts to constitute a high powered special committee on recovery of missing Governennt property or taken away by the immediate past administration of former Govenror Kashim Shettima now a serving senator of the federal republic of Nigeria representing Borno Central senatorial district at the national assembly.

The concerned Stakeholders also called on the governor to disclose to the public the total debts the state governennt is owing both local and foreign as liabilities to the state which have been handed over to him by the immediate past administration of Former Governor Kashim Shettima .

The Spokesperson of the group, Malam Tanimu Abdullahi said it became necessary and part of good governance and transparent Leadership which Gov.Zulum have started demonstrating.

He noted that in a situation where a governor who is expected to be the chief custodian, accounting and administrative officer of a state can not account for assets and liabilities of his government and tell his people what he has done with all the monies and property he inherited and collected in the past 8 years.

Tanimu added that it is uncalled for such a leader to even hand over governennt after 8years to a new govenror within telling the good people of Borno State how much he left behind in the governennt coffers for his successor to continue the governance if the state as he expected and said government is a continuous process.

Malam Abdullahi further said that it is part of public accountability for a governennt to be held accountable to its people and educate or enlligjten them of assets and liabilities of the state by way of ensuring probity and transparency or openness in governance.

The group’s spokesman however suggested that if the governennt’s property and vehicles can not be mutually recovered from those that picked them unlawfully and illegally, they should be reported to the ICPC and EFCC for further thorough investigation, pointing out that, “it is the only way the governor could be made to face the wrath of the law hence nobody is above the law, noting that, even the President of Nigeria will not go so low to do such a thing after serving his people for 8 years and acquired all what he needs in life to live a comfortable life”.

But a cross section of the society are of the opinion that the recovery of missing property from the governennt house which is the first in history since the inception of civilian administration in the state, a mutual and right procedures should be followed to recovered the missing property while the financial liabilities should rather be disclosed and determined instead of being silent and putting the public in suspicion.

While other section of the society was opposed to the call for the setting of up if a recovery committee. Rather the former governor kashim Shhettima should be invited respectfully for enquiry by the new governor or a letter written to the former governor to return the said missing property and vehicles from the governennt house

A civil servant, James Wakawa said,” we support and Wellcome such development because it is in the interest of the people and state generally”

“We were disappointed when we heard that the former Govenror kashim Shhettima did such a thing. We never expected he will go so low to the extent to do such things.

“We however pray that he will understand what he did was wrong and implicative as a former governor and serving senator. It has never been done like that. But may be he was ill advised to do so but whatever it is such was wrong and he should be held responsible and accountable anytime” , Wakawa said.

An APC Stalwart, grassroots politician and Clergyman, Malam Hassan Goni Kachallah based in Maiduguri said,” Islamically or religiously from any angle, the conduct is wrong and an offence that whoever commits such will have to be held responsible and accountable.”

“There is nothing wrong with that as far as public trust and accountability is concerned. Everywhere in the world even during the lifetime of Prophet Muhammad SAW, leaders were held responsible and accountable to property and funds entrusted to them.

” They stand to be asked to account for such things under their care and control. That is why honesty, truthfulness, sincerity, fairness, fear of God, patience, determination, dedication, commitment, self contentment among others are virtues of a good and righteous leader which many leaders don’t possess nowadays because of high taste and quest for worldly things and accumulation of wealth.

“My prayer here is that, the present governor should amicably and peaceful find ways to address the matter by meeting his predecessor first in person and discuss the issues.

” Let Zulum tell Kashim what are missing and how such can be recovered without any rancour hence they are firends, colleagues and mates. It is better this way than going to the public to expose selves or their onions in the public.

“We need peace and with the emerging peace, let there be continuity and friendliness among them in the interest of the good people of Borno who are paramount and the major stakeholders. But definitely, kashim has done wrong and a great mistake. So, let it be corrected rather than otherwise,” Goni Kachallah said

He added that as a politican, it will be embarrassing to defend such a thing and from a governor not even a LGC Chairman or Councillor or Speaker of the house but a govenror.

“We pray such will not happen again in the hisitory of Borno politics for a governor leaving office after 8 years to park governennt property from governennt lodge just like that and even governennt vehicles,” Kachallah said.