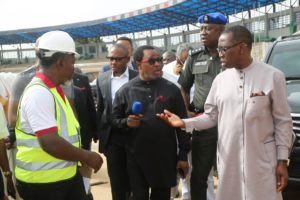 Delta State Governor, Dr. Ifeanyi Okowa, has expressed confidence that the Stephen Keshi Stadium would be ready for use in May 2018.

Addressing newsmen after an inspection visit to the stadium in Asaba, Governor Okowa said the stadium would be ready in May and would be able to host national competitions.

According to him a�?I am told by the contractors that looking onto the month of May they should be completing this project and I believe that once the stadium is completed some of these national assignments and competitions will also take place here, the President of the Nigeria Football Federation has already spoken towards that because once something is good it cannot be hiddena�?.

Governor Okowa assured that the completion of the stadium would enhance the state governmenta��s plans for youth sports development, emphasizing that the state would benefit from such activities.

a�?We are in the plan to grow a lot of sporting activities as we are actually concerned with youth sport development and I am sure that a lot of activities will be taken place here. Recently, we have been using the Ozoro stadium; we will not stop using it but this obviously will be a higher quality stadiuma�?, the governor said.

Governor Okowa asserted that with the completion of work at the 23, 000 sitting capacity stadium, sporting activities of international magnitude will take place in the state.

He commended the contracting firm handling the project for keeping to time schedule and specifications, emphasizing that the state was ready to host the world in August.

254 thoughts on “Stephen Keshi Stadium, Ready In May — Gov Okowa”