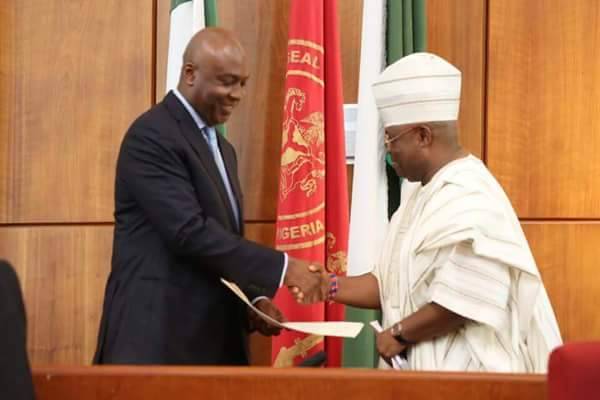 Political associates, supporters and friends of the Senator representing Osun West Senatorial District, Senator Ademola Adeleke have been advised to disregard the video of a randy man dancing with two ladies inside a swimming pool which some mischievous individuals have attempted to falsely use to embarrass the senator.

In a press statement on behalf of Senator Ademola Adeleke; Mr Dele Adeleke said the randy man dancing in the video does not even resemble the senator and wonder how his distractors could be very callous and gullible to make such spurious claim in their desperate bid to suppress the popularity of the senator.

According to the statement, “The attention of Senator Ademola Adeleke has been drawn to a very disgusting video of a randy man in a mini pool being danced all over by half naked girls”.

“The man in the video is definitely not Senator Adeleke. The man is far too slim and darker in complexion compared to the Senator. Anyone who can pay attention to details will easily spot the difference.”

“It is very sad that political desperados have descended to such abysmal levels of peddling falsehood, circulating a stranger’s lewd video as that of Senator Ademola Adeleke.”

“These political enemies are clearly threatened by the Senator’s rising profile and popularity not only with the good people of Osun but also good spirited Nigerians from all works of life cutting across the length and breadth of our great nation.”

“As a confirmation of the falsehood, the publisher of the fake video, www.dailybells.com.ng has apologised for the falsehood and pulled down the video.”

“The Senator has since resumption in office began to work assiduously to make an impact. Within the first few weeks in the Senate, he lobbied and worked with his colleagues on the floor to push for the passage of devolution of powers and autonomy for Local Governments.”

“Within 2 months as a Senator, he started fulfilling his campaign promises. He provided a brand new Generating set to support the dying business of Abattoir operators in Iwo and he recently launched a N250million full Scholarship program for indigent students of the 10 local government areas that make up Osun West Senatorial District.”

“The good people of Osun are hereby assured of Senator Ademola Adeleke’s commitment to always protect their interest as well as their full emancipation from the stranglehold of the invaders and enslavers.”

Dele Adeleke said the Senator remains focused and committed to a fully reconciled, united and strong PDP that will help to deliver the hopes and aspirations of full emancipation and empowerment of the deprived indigenes of Osun.

He said the fake video and any of such falsehood should be disregarded as nothing but acts of desperation of people who clearly cannot cope with the new wind blowing across the state.

40 thoughts on “‘Stop the Lies; Randy dancer inside swimming pool not Senator Adeleke’”