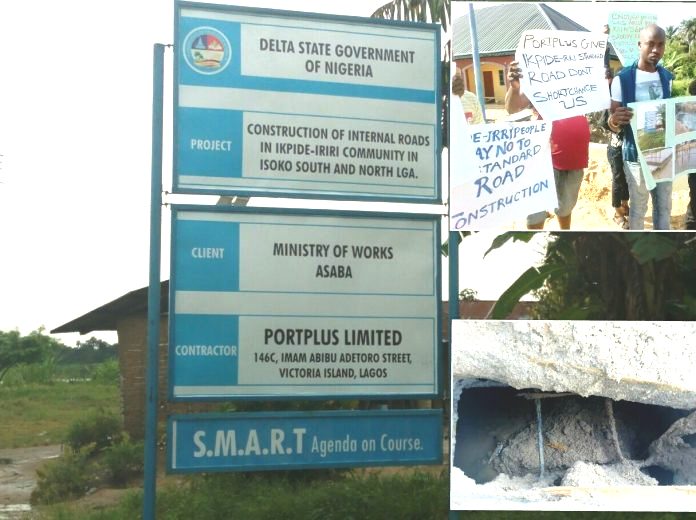 The lingering ripples and scuffle rocking Ikpide-Irri riverine community, Isoko South local government area of Delta state following the ongoing substandard road contract awarded as a “Kola-nut” to PORTPLUS limited, a marine service company at the sum of N736, 404, 555.60 by governor Ifeanyi Okowa, is yet to abate.

The ripples, it was gathered has taken a new dimension that if not properly handled may snowball into a full blown crisis in the community following the alleged way and manner the President General of the community, Mr. Michael Omojefe, an elder brother to the contractor, is giving backings to the contractor not to reconstruct the substandard culverts in the community and the manner he is said to be handling the whole issues to the detriment of the people.

Sources who confided in The Nigerian Voice revealed that the contractor, Portplus Limited has purportedly released undisclosed sum of money through his elder brother, President General of the community, Mr. Omojefe, and disbursed to a particular Chief, and ex-military personnel, in the community who was a former Vice Chairman of the local government and few others for their full support as long as the contentious issues last.

It was also learnt that the money disbursed to the chief and others was to sign a fake resolution document disclaiming the indigenes of the community fighting against the substandard road contract being executed by the Portplus limited company.

“The President General, Mr. Michael Asedere Omojefe, is just acting like a child; he is behaving like a robot and bieng controlled by the contractor, his younger brother. The way and manner he is going about the whole issues may snowball into a crisis in the community if not properly managed.

“He calls for meetings without carrying his executive members along, he does everything alone. When a resolution is reached in a meeting he goes around spreading lies and doing a different thing, all to please his contractor brother. I can tell you that his executive is divided; even the whole community is divided because of the PG.

“What the people are saying is a standard job which the PG is not in support off. I can also tell you that some engineers and senior staff of the Ministry of Works have been compromised too. The contractor is cutting corners just to amass wealth. All the culverts are substandard done with 10mm instead of the specified 16 and 12mm rods. There are so many obvious defects in that road construction.” am impeccable source said.

The Nigerian Voice reliably gathered that another meeting of selected persons called “STAKEHOLDERS” has been called by the president General of the community, Mr. Omojefe without the consent of his executive members and other leaders of the community.

The meeting, it was learnt is slated for Saturday, July, 21, 2018 at the residence of Admiral John Kpokpogri (RTD) at Ikpide-Irri by 10:00am where a clean bill of health will be given to the substandard job and signing of a purported document disclaiming the indigenes of the community fighting against the ongoing substandard job by Portplus limited.

The concerned indigenes of the community through a petition addressed to the state governor and signed by their counsel, Mr. Chuks. F. Ebu, had raised the alarm of substandard job by the contractor saying the job was not being done according to specifications in the Bill Of Quantity, (BOQ).

It would be recalled that two weeks ago, the community youths had staged a peaceful protest calling on the contractor to as a matter of urgency and importance follow standards in the execution of the contract or be ready to face the music of the Economic and Financial Crimes Commission, (EFCC) and the Independent Corrupt Practices and Other Related Offences Commission (ICPC).

Speaking during the protest, an Activist and indigene of the community who doubles as the President of Isoko Monitoring Group, (IMG), a Pan Isoko group known for championing of development in Isoko, Delta and beyond, Mr. Sebastine Agbefe, lamented the substandard work by Portplus limited and called on the contractor to immediately destroy and reconstruct all the culverts in the community that were constructed with 10mm instead of 16mm rods according to the BOQ.

Several calls to the community President General, Mr. Michael Omojefe were not responded to as at the time of filing in this report.

But in the state government’s response, the Commissioner for Works, James Augoye, said “Just on Monday this week, I sent a team of engineers made up of very senior directors of the Ministry of Works. Director North, Director South and about 7 other engineers to visit the site because of what we saw on social media and when they visited the site, they met with the President-General and other leadership of the community.

“They met with the contractor and they also met with those who actually petitioned and they went with the Bill Of Engineering Measurement to ensure that what the contractor is doing is in line with what we have in our bill. I am yet to have a full brief on their visit but however the preliminary report suggested that there was a gap between the petitioners and our contractor.

“The initial length of that road was 6.5km but what was awarded by the state government as phase 1 was 3km. The petitioners stated that it supposed to be two side drains, what we awarded was one side drain and the diameter of the drain we awarded was 750 by 750 by 150mm which is in line with our bill”.