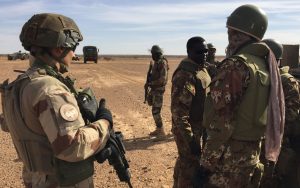 a�?Terrorists have killed four soldiers in Menaka in an attack,a�? a Malian military source said, adding: a�?They were not able to overrun the military camp. We are now in control of the situation.a�?

The incident was confirmed by a second Malian military source, who said the armed attackers arrived a�?this morning on motorbikes and in carsa�?, while a local official said the group had fired rockets.

French helicopters were circling the area, the sources said.

Fourteen soldiers were killed and 18 wounded on Saturday when suspected jihadists seized control of their camp in Soumpi, near Timbuktu.

And on Thursday 26 civilians including mothers and babies were killed when their vehicle ran over a landmine in Boni, central Mali, leading President Ibrahim Boubacar Keita to cancel plans to attend an African Union summit in order to visit the area.

Keita told victims’ families: a�?All of Mali was in mourning, all of Mali is appalled,a�? over the high death toll among civilians.

a�?Everyone knows what we are going througha�� Every day we do what we can,a�? he added.

Islamic extremists linked to Al-Qaeda took control of the desert north of the former French colony in early 2012, but were largely driven out in an ongoing French-led military operation launched in January 2013.

In June 2015, Mali’s government signed a peace agreement with coalitions of non-jihadist armed groups. But Islamist insurgents remain active, and large tracts of the country are lawless.

Passenger Slumps, Dies While Waiting To Board Flight After Receiving News Of Wife's Death