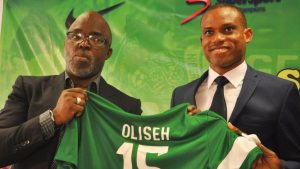 Sunday Oliseh has blasted the administrative foibles at his former employers the Nigerian Football Federation, and revealed exactly why he quit his role as Super Eagles head coach.

The former coach tells of a torrid time during his brief tenure in charge as he stood his ground on principles, just as he has done at Fortuna Sittard in the Netherlands before being dismissed last week because, he claims, he did not want to participate in unspecified illegal activities .

Oliseh, 43, never brooked much nonsense as a player and was no different as a coach when he was in charge of the Nigerian national team for eight months between July 2015 and February 2016.

a�?It was frustrating,a�? he told KwesA�ESPN. a�?The great things about the Nigerian job were the chance to serve your nation and put them on a track.

a�?One of the first things I did when I got the job was to bring a lot of young blood in because the team itself was already on the wane. Players like [Alex] Iwobi, I brought into the team, I gave him his first call-up, and some others who had been sidetracked like Moses Simon.

a�?I brought them in and pushed them up.a�?

Oliseh, who played in two World Cups, stunned Nigeria when he walked after just eight months, telling the NFF in an email of his intention to resign .

Only now, speaking to KwesA�ESPN, has he fully explained why he left the Super Eagles post.

a�?It was frustrating, but at the same time it was a job that had I wanted to hold onto, I would have held onto it,a�? he began, a�?but it got to a point where I felt like I wasna��t having fun, a�?Ia��m not enjoying thisa��.

play
1:06
Oliseh: If I wanted Nigeria job I woulda��ve held onto it

Former Nigeria coach Sunday Oliseh opens up about the accomplishments he had while in charge and the push back he received when he left.

a�?I remember very clearly the day I told the federation, I sent them an e-mail and said a�?Look, I dona��t want to coach anymore, Ia��m resigninga��. They said a�?you cana��t do that, we dona��t resign here, no coach has ever done thata��.

a�?I said Ia��m not enjoying it, I had a philosophy; something I wanted to put on the ground in Nigeria; it was working well, the players were playing well.

a�?They said to me a�?How can you leave this job? Many of your colleagues would die for ita�?. I said, a�?Yeah, then give the job to them!a�� I understood it when some of my countrymen said a�?Hey, how can you leave?a�� but I wasna��t enjoying it.

a�?I was falling sick, the atmosphere was cloudy, players were unpaid, I was unpaid, my assistant coaches were unpaid, as much as six months. I was four months unpaid.

a�?Some would say to you, a�?and so? ita��s normala��. I say ita��s not normal. I have bills to pay in Europe, but it helped me a lot because the fact that I put a philosophy on the ground and I saw how it workeda��it worked so well.

a�?It confirmed to me what I suspected I had inside of me, that I can do this sort of job.a�?

Oliseh went on to break ground for African coaches by being appointed at Fortuna Sittard in the Dutch second division and taking the club from virtually bottom to top of the standings.

Despite his troubled experience with the Super Eagles, Oliseh is confident that Gernot Rohra��s young side can thrive at the World Cup.

a�?Wea��ve got strength, technique and pace,a�? he concluded. a�?So I think we can be optimistic.

UCL FINAL: Madrid Have Experience But We Can Hurt Them – Klopp