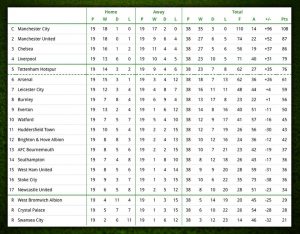 The Premier League title race is hotting up as we move into the festive fixtures.

Manchester City top the table with a whopping 55 points from their opening 19 games while rivals Manchester United lie second with 42 points.

Chelsea are third ahead of Liverpool and Tottenham who are fourth and fifth respectively.

Down at the other end of the table, Swansea are bottom with West Brom and Bournemouth occupying the other two relegation spots.

But will the Premier League table look the same at the end of the season?

The stats geeks over at  Football Web Pages  have done some number crunching and predicted how they think the final Premier League table will look.