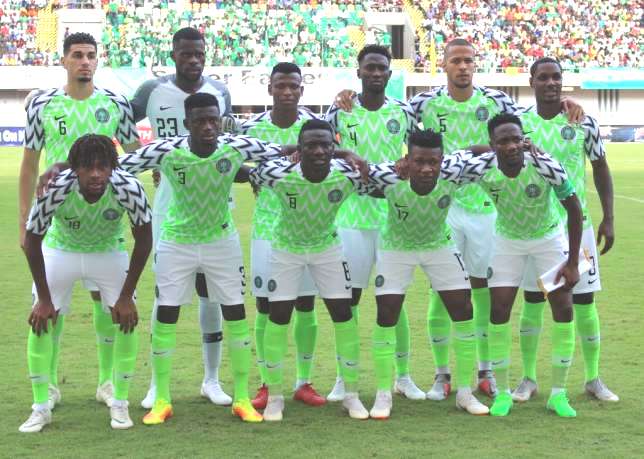 Nigeria are seeking to seal their qualification for the Cameroon 2019 Africa Cup of Nations when they battle South Africa for three points on Saturday at the FNB Stadium, Johannesburg, in their fourth qualifying match for the tournament.

After losing their opening match in Group E 2-0 to Bafana Bafana last year, the Super Eagles revived their hope with a 3-0 win over Seychelles in Victoria in September.

They consolidated on the achievement with two wins over Libya in their double-header in October.

Interestingly, Nigeria are closer to qualifying for the tournament after missing the last two editions of the competition in 2015 and 2017. A win qualifies them for the tournament while the South Africans need a win to keep alive their qualification hopes.

Nigeria and South Africa have met 13 times, with the Eagles winning seven times while Bafana have emerged victorious on two occasions with four meetings ending in a draw between both sides.

Relying on a cautiously-defensive approach – which has helped them to avoid conceding any goal since the qualifiers began – South Africa boast a largely home-based side, who have played together for a long while.

However, both sides have had to deal with injuries to some of their key players with Nigeria losing top striker Odion Ighalo and first-choice goalkeeper Francis Uzoho to injuries. Nigeria will also miss defensive midfielder Wilfred Ndidi, who is suspended for the match after accumulating two yellow cards.

South Africa will miss Bongani Zungu, Keagan Dolly, Kamohelo Mokotjo, Dean Furman and Sibusiso Vilakazi, who are also out due to various injuries. But they are boosted by the return of midfielder Thulani Serero to the team.

Nigeria coach Gernot Rohr believes the injuries and suspension is an opportunity for some other players to impress.

“Yes, we have a number of injuries and one suspension. But we cannot continue to talk about that. We must look at the personnel with us now and see the situation as opportunity for them to step up and prove what they can do,” the German said.

“I am happy we have a young team determined to achieve. Everyone here is good enough to represent Nigeria and they will go in there and do the job.”

The Eagles left Asaba, where they prepared for the match, for Johannesburg on Thursday and trained in the Johannesburg heat on Friday.

Nigeria’s stand-in captain Ahmed Musa is confident his team can stop Bafana in their backyard and seal qualification and seal their AFCON qualification.

He said, “Our determination is to win and pick our ticket to the AFCON ahead of the final match day next year. South Africa came to Nigeria to beat us and we are here to return the compliment.

“We will not be playing for a draw. We won in Seychelles and against Libya in Tunisia and we are in Johannesburg to win as well. The South Africans are a strong team and we will not underrate them. But we are here (in Johannesburg) for the three points.”

Bafana coach Stuart Baxter is aware that the Eagles are unbeaten in the qualifiers since they lost in Uyo in 2017. But he believes his side can get a good result from the match.

He said, “They (the Eagles) are undefeated since we beat them the last time and they will certainly want to wreak their revenge. So‚ we will be ready and I still believe that we have a very good chance of getting the result that we need.

“I think we have still enough talent despite the injuries we have. We have enough desire and if we can structure a game-plan‚ I think by the time we run out onto the FNB Stadium we will be confident‚ but not complacent‚ because Nigeria have just come from a World Cup.”