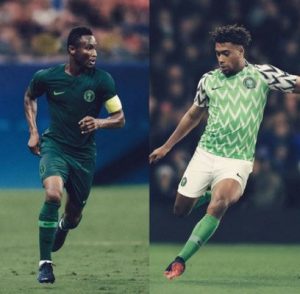 United Kingdom online news hub  mirror.co.uk  has rated Nigeria’s World Cup kits the best among the 19 so far unveiled by the teams that are going to the mundial in Russia this summer, reports  Completesportsnigeria. com.  The Super Eagles World Cup kits were unveiled in London by the manufacturer, Nike in London  on Wednesday .

The website did a ranking of  the kits of all the 19 countries who have unveiled their World Cup kits and picked the Nigerian  jersey as the best from the lot.

a�?And while you’re there, pick up this glorious effort from Nigeria that comes out as a deserving No. 1,a�? reads the statement on the website.

a�?It’s incredible, frankly, and is bound to turn us all into Super Eagles in the summer.a�?

Some of the  other countries that have unveiled their jerseys are hosts Russia, Nigeria group foes; Argentina and Croatia, as well as Belgium, England, Switzerland and Uruguay.

The  kits ignites  memory of the patterned Adidas jersey that the Super Eagles wore at the 1994 Africa Cup of Nations in Tunisia and their first World Cup in the United States of America that same year.

What appears to be the away kit has the shirt in predominantly light green background with bold white V-shaped patterns drawn on it. The sleeves are white underneath black patterns. The shorts are plain white.

The home shirt is all-green jersey which is darker than usual.