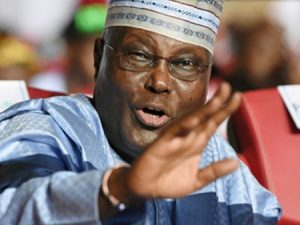 PDP and Abubakar alleged that the “server” housed the results of the poll electronically transmitted by the Independent National Electoral Commission during the exercise.

Moving the motion for the inspection of INEC server and other electoral materials, a lead counsel to Atiku and the PDP, Chief Chris Uche (SAN), said the request was essential to their petition challenging the declaration of President Buhari as the winner of the election.

Atiku and PDP  stated in their petitions that by the figures obtained from INEC’s server showed they won the presidential election against Buhari and the third respondent, All Progressives Congress (APC).

INEC denied the claim, insisting that it never transmitted the results of the polls any server whatsoever, but that the results were collated and declared manually.

President Muhammadu Buhari and his All Progressives Congress, whose victory at the polls is being challenged by the petitioners at the tribunal, also opposed the petitioners’ request for access to the said INEC’s server.

Tribunal on June 24, in a ruling, dismissed PDP and Abubakar claim that INEC electronically transmitted the results of the February, 23 polls to the said central server. But Atiku and his party proceeded to appeal the tribunal’s ruling.

The apex court, however, held that the Atiku and the PDP do not have a reply to an application filed on May 14, 2019 by the All Progressives Congress (APC) seeking among others, the dismissal of their (Atiku and the PDP) challenging President Muhammadu Buhari’s victory at the last presidential election.

A five-man panel led by Justice Datijo Mohammed, struck out the appeal for having become statute-barred.