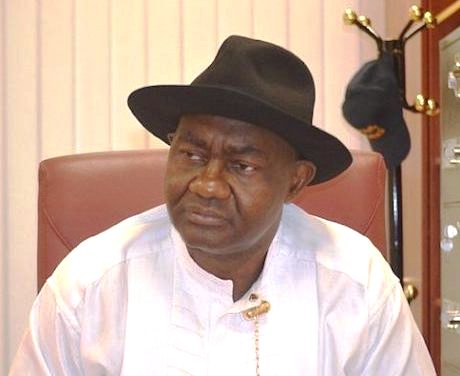 The Senator representing Rivers South-East Senatorial District in the National Assembly, Magnus Ngei Abe has described the ruling of the Supreme Court in favour of Ibrahim Umar and other APC chieftains, who were aggrieved by their exclusion during the Party Congresses in Rivers State as a stunning victory for Democracy, Justice and the rule of law in Nigeria.

Abe, in a statement issued by his spokesperson, Parry Saroh Benson, reiterated that the issue in Rivers APC has always been about inclusion, justice, respect for party members and adherence to due process.

“Today, the Supreme Court again made the point that no one is above the law consequently, it is time for us to put the interest of Rivers APC above every other interest.

“The victory at the Supreme Court this morning is a stunning victory for Democracy and Justice. The God of justice has spoken and every other voice must now be silent”.

“We had always maintained that only one valid and lawful primary election was conducted by the APC in Rivers State, because the indirect primaries did not exist in law.

“With this latest pronouncement by the Supreme Court, it is now clear that the voided congresses in Rivers State, as well as the indirect primaries that it gave birth to, has been knocked down not just by the State High Court, but that position has now been upheld by two separate panels of the Court of Appeal Port Harcourt Division and two panels of the Supreme Court of Nigeria”.

He said it is time for the APC to face reality and put an end to all the frivolous appeals been filed in its name, and do the right thing.

Recalled that the Supreme Court had on Friday again upheld the order of the High Court, and made an order dismissing an appeal filed before the Court of Appeal in Port Harcourt Division against the High Court judgment.

A five-man panel of Justices of the Supreme Court unanimously refused to tamper with the High Court judgment that before now barred the APC from conducting its Ward, Local Government and State Congresses in Rivers State, pending the determination of a suit that was filed by 22 aggrieved chieftains of the party.

The request was rejected by the panel of the apex court led by Justice Mohammad Dattijo, which rather re-affirmed its previous ruling that validated the High Court order.

The Supreme Court invoked section 22 of its Act which allows it to take over a matter and give final judgment to decide on the appeal.

In a lead judgment delivered by Justice Sidi Barge, the Apex Court held that by virtue of section 11 rule 5 of the Appeal Court rules, the appeal against the High Court ruling having been withdrawn on the orders of the authentic State Legal Adviser of the APC, Mr. Chiweikpe Chieme, ought to have been dismissed by the Court of Appeal.

Justice Barge said that since the Court of Appeal failed or refused to make the dismissal pronouncement for the said appeal, the Apex Court has no choice than to invoke section 22 of the Supreme Court act to assume jurisdiction over the case and decide on it.

According to him “it is my considered opinion that this appeal must be given a decent burial. The appeal having been withdrawn at the lower court by the respondent is deemed dismissed”.

“This is what the lower court failed or evaded to do. “Therefore by virtue of section 22 of the Supreme Court Act 2004, the lower court having failed to exercise its powers provided under order 11 rule 5, this court is bound to do so”.

Nigerians will recall that Justice Chiwendu Worgu of the High Court of Rivers State had granted an order restraining the APC from proceeding with its Ward and Local Government Congresses, which the party refused to obey, the court subsequently voided the entire congresses and its products from the indirect primary.