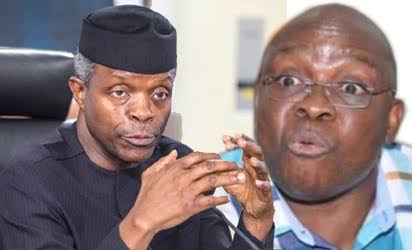 Former Governor of Ekiti State, Ayodele Fayose, has described the Vice President, Yemi Osinbajo as an embarrassment to the law profession.

He anchored his claim on Osinbajo’s silence over the suspension of the Chief Justice of Nigeria, CJN, Walter Onnoghen.

Fayose urged relevant authority to strip Osinbajo of his SAN title over his alleged silence.

Buhari had on Friday suspended Onnoghen and appointed Tanko Muhammed as acting CJN.

Explaining his reason, the President said he suspended Onnoghen, following an order from the Code of Conduct Tribunal, CCT, asking him to wield the big stick.

In his speech sent to DAILY POST, Buhari said the order demanded that the CJN be suspended pending the determination of his ongoing trial at the tribunal.

However, Fayose claimed that Osinbajo’s desperation to remain the Vice President has allegedly closed his eyes to the illegalities in the current government.

In a tweet, Fayose wrote: “@ProfOsinbajo, a SAN is no doubt an embarrassment to the legal profession. Out of desperation to retain his position as VP, he has shamefully chosen to close his eyes to the illegal suspension of the CJN.

“His likes in this government of tyranny should be stripped of the SAN title.”

9 thoughts on “Suspension Of CJN By President Buhari: Osinbajo Is An Embarrassment, Should Be Stripped Of SAN Title – Fayose”