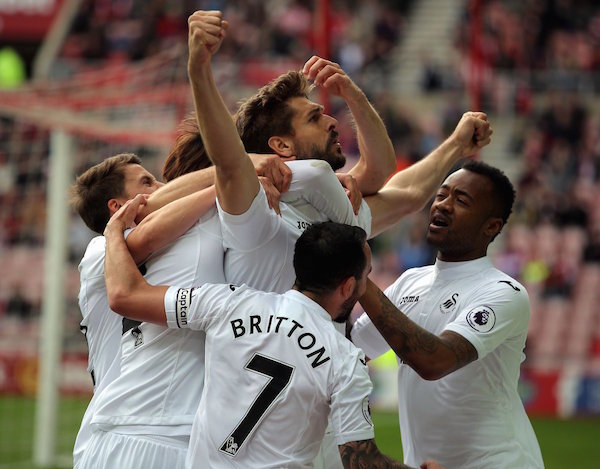 Swansea struck a crucial blow in the fight for Premier League survival as goals from Fernando Llorente and Kyle Naughton clinched a 2-0 win at Sunderland on Saturday.

Spanish striker Llorente put Swansea ahead early on before Kyle Naughton blasted his first goal for six years on the stroke of half-time.

Swansea’s third win in their last four games moved Paul Clement’s 17th placed side four points clear of the relegation zone as they battle to stay above third bottom Hull.

The Welsh club’s survival will be guaranteed if Hull lose their crunch clash at fellow strugglers Crystal Palace on Sunday.

Even if Hull win or draw against Palace, Swansea can still ensure their safety with a victory at home to West Bromwich Albion in their final game of the season on May 21.

Relegated Sunderland failed to win at home for the 10th successive match and their final appearance at the Stadium of Light this season was played out to a familiar soundtrack of chants for the sacking of boss David Moyes.

Sunderland’s victory at Hull last weekend had given Swansea a huge boost as they climbed out of the relegation zone with a win over Everton and the confidence gleaned from that momentum swing was clear as Clement’s side took the lead in the ninth minute.

Gylfi Sigurdsson swung over a free-kick and when Sunderland goalkeeper Jordan Pickford failed to collect, Llorente rose to head into the empty net for his 14th goal of the season.

Jermain Defoe can leave Sunderland for free at the end of the season because of a relegation clause in his contract and the England striker came close to a farewell goal when his shot was pushed over by Lukasz Fabianski.

But Swansea had suffered only one defeat at Sunderland in the last 53 years and that impressive record looked certain to be extended after Naughton doubled the visitors’ lead in first half stoppage-time.

Ki Sung-Yueng’s pass picked out Naughton’s run into the penalty area and the defender fired into the top corner for his first ever Swansea goal.

Swansea were bottom of the table in January when they made Clement their third manager this season, but the former Bayern Munich assistant has masterminded a dramatic escape act that should climax with top-flight survival.