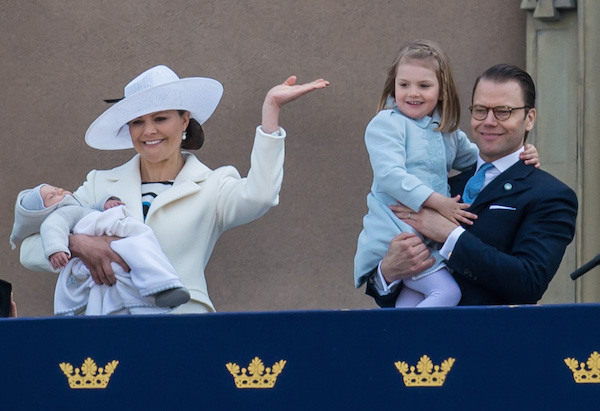 Growing up royal comes with lots of perks and privileges, but Crown Prince Daniel of Sweden has revealed that he doesn’t want his children growing up too pampered.

In an interview with the Swedish newspaper Dagens Nyheter, the 43-year-old explained that he wants Princess Estelle, five, and Oscar, 15 months, to experience as much of normal life as possible.

He added that he doesn’t want them to miss out on cheering on their team at a football game or being out in nature.

‘We want our children to have the same opportunities we’ve had to feel safe in that environment.’

The royal, who is married to Sweden’s Crown Princess Victoria added: ‘Being with your children is the best thing in the world.’

He also revealed that Princess Estelle loves dancing and is currently learning to ride a bike, which which he described ‘incredibly fun’.

Prince Daniel’s sentiments echoed those of Prince William, 34, who also recently spoke of his desire to give his children – especially the future King – as much of a normal upbringing as possible.

‘I want George to grow up in a real, living environment,’ he explained in an interview with GQ.

‘I don’t want him growing up behind palace walls, he has to be out there. The media make it harder but I will fight for them to have a normal life.’

In an upcoming documentary, which will air on Swedish TV to mark Princess Victoria’s 40th birthday, she also revealed how her daughter’s character is emerging as ideally suited to royal life.

She described Estelle as ‘curious, social and brave’, saying it’s an ‘asset’ as she will one day be the Queen of Sweden and said she gets her sociable nature from both her parents.

Ensuring their children are prepared for the demands of royal life is no doubt of particular importance to the couple as Crown Princess Victoria developed anorexia after stepping into her public role at the age of 18.

In an upcoming documentary she explains that once she began to support her parents’ work, after growing up away from the limelight, she started putting more and more demands on herself.

‘I wanted all the time to do and be so much more than I realistically could do, or could be,’ she said.

She postponed her place at university and sought treatment in the US where she learned ‘to put words to feelings and thus, be able to set limits and to not constantly push myself too much.

The palace announced she was suffering from an eating disorder in November 1997, when 20-year-old Victoria was due to start at Sweden’s Uppsala University, after she was pictured looking noticeably thinner at public appearances.