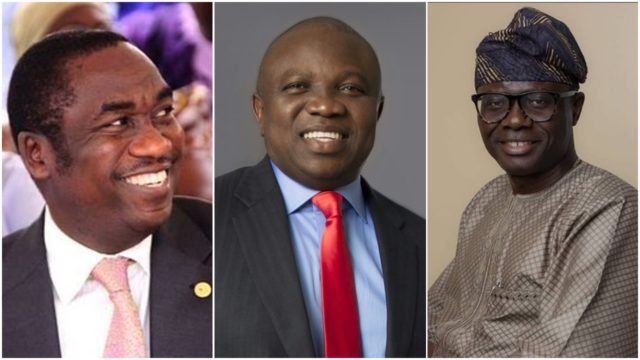 The Lagos APC Guber Primary has come and gone with all its intrigues, lessons, drama and gimmicks. We have seen how the fate of one man was manipulatively decided by thousands of grassroot politicians; the “mama alata” (Pepper seller) “eleran”(meat seller) and “oni wosisosi” (petty traders) led, controlled,maneuvered and exploited by the one they call 'Jagaban'.

Though, we were railroaded by the unconvincing tale of how Governor Ambode hasn't exactly performed according to the expectations of the people of Lagos, compared to his predecessor, Babatunde Fashola and in line with the Lagos development plan. However, we know that the real reason behind the malicious treatment of the Governor is more of a question of loyalty and neglect of the interest of the party stalwarts after he assumed office rather than performance. Even the breakaway faction of the political family, including the Minister of Power, Works and Housing, Babatunde Fashola and former APC legal adviser, Dr Muiz Banire couldn't help because, apart from lacking the political platform needed against the mighty Tinubu's political domination, they are not exactly fascinated by Ambode.

The effect of this malady is that our political terrain is ladened with the control of Godfatherism which is a contentious issue. Godfatherism is responsible for distorting the effective functioning of political parties. Some political gladiators are involved for the purpose of exploiting the states' resources, running the affairs of the state in a Patrimonalism system of government which completely negate the principle of democracy; of transparency and accountability for effective functioning.

Another effect would be, while the youths control the majority of votes cast during elections, they end up controlling nothing after politicians win elections. A close look at the history of Nigeria reveals how much the youths have featured prominently in politics and governance since Independence. Today, the reality is a polity where Nigerian youths are used as election consultants, social media battalions, and political thugs to mention but a few.

Many have blamed the new trend on a conspiracy of the elite class who cannot stand the idea of vacating the scene for the younger generation, creating a system that makes it impossible for young people to emerge and succeed in politics and governance. While this perspective is not entirely incorrect, there are more than enough premises to validate the argument that Nigerian youths are their biggest problem. Greed, selfish ambition, lack of capacity and the new craze for fast money have conspired to weaken the ability of Nigerian youths to collaborate effectively a united front to advance the well-being of young Nigerians.

Moving forward, the key to effective youth participation in politics and governance is, to begin to get involved at the political grassroot level; this is where the present crop of corrupt leaders first emerge. To be involved at the level of the parties where decisions are taken on the candidates presented to the electorate; this is to wrestle political power off the few “powerful Individuals” who have privatized the states and cornered its resources to the detriment of us all. Not all youths can go into politics but the competent ones with character and integrity must get in there and other Nigerian youths must encourage rather than demonize them. Henceforth, political parties must be able to elect its candidates in a free, fair and credible election through popular participation and not an imposition of candidates on the electorates.

In implementing a different representation from what we presently have, we must device a new way; right from the grass-root up to the federal level on how to pick credible, upright and responsive leaders who can be held accountable and assessed on performance basis. It is hoped that other progressives will align with this movement (The New Epoch Youth Empowerment Foundation) to embark on the mobilization of the people to take their political destiny into their own hands, young Nigerians will also need to understand that as youths, we are not in a power tussle with ourselves. We can co-exist and work together even when we have different targets and aspirations. We only need to look at ways we can collaborate as young people across political divides to make Nigeria a FREE NATION; in sync with our core values of making this country one devoid of political hangers on, favoritism and Political reasoning.

An Open Letter to the Ijaw Nation, a�?Know Your Enemiesa�?

8 thoughts on “Takeaway From The Lagos Guber APC Primarys' Election and Youths Involvement in Nigerian Politics.”