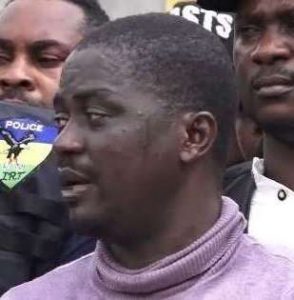 Hamisu Wadume, the controversial kidnapper who caused the untimely death of five officers of the IGP, Intelligence Team (IRT), in Taraba State, last week was a fish trader before venturing into the kidnapping.

The young man who traded in both fresh and dried fish in Wukari, in Taraba State, up till sometime last year, was said not to be doing very well and had to venture into kidnapping where he is said to have made millions of Naira from the family members of his abductors.

Wadume was said to have started his notorious business with six AK47 rifles and 3,000, rounds of ammunition.

He got his supply from certain Ojomo Gbenga Adebowale, said to be a notorious arms dealer who was arrested alongside other members of his gang by men of the IGP Intelligence Response Team (IRT), and was recently paraded by the Police Force Headquarters, in Abuja.

In this interview with The Sun, Gbenga, who graduated from The Polytechnic, Ibadan, Oyo State, spoke on how he met Hamisu Wadume through one of his clients in Onitsha. The arms dealer who has been into arms business for over a decade said he never knew his client was into kidnapping even though he confessed that it was not his duty to interrogate his customers on what they needed the weapons for.

He said that as an arms dealer, he was careful with the kind of people he kept as friends. Excerpts:

My name is Ojoma Gbenga Adebowale. I am 35 years old and hail from Ondo State. I graduated from The Polytechnic, Ibadan. I studied Engineering and finished in 2001.

What have you been doing since then?
I am a gun runner; I am into firearms dealership.
How did you get to know Hamisu, the man who caused the death of the IRT officers?

I got to know him through certain Moses. You know the firearm business involves a lot of people; it is not a one-man business. It’s a cartel, and we have bases and we are based in different places such as Lagos, Ibadan and Onitsha. So, I got to know Hamisu through Moses from Onitsha. This Moses is a friend to Dooshima and Dilili, who happen to be Tiv guys from Benue State.

Hamisu is a friend to Doshima and Dillili and they usually come from Makurdi to see Moses who is my partner in firearms business; that was how I met him. There was a time I travelled to do supply in Onitsha; that was the first time I met them and that was about four years ago.

They came together to Onitsha. He wasn’t my customer, so I didn’t have much dealing with him; I only chatted with him because my business is a mafia kind of business; so I’m careful with the kind of people I deal with. Besides, I didn’t want my partner to think that I wanted to steal his customers from him. So, I decided to stay away from them.

I think the last time I went to make a supply, I went to Makurdi, that was six months after we met in Onitsha. We were all together in Makurdi; that was where I got to know that Hamisu is actually from a Taraba State, because all along I was thinking he was from Benue State because of his friends.

That was four years ago when I went to supply Doshima and Delili their consignments.

Later, I don’t know if he got my number from them. But early this year, I think around January, because I travelled out of the country because I had a problem, travelled and came back. That was when they then, broke the news of the death of Delili. He told me that Delili was dead and that he got my number through Delili because when he called me early this year, he was calling with a hidden number. It was when I picked that he said Delili was dead. I was shocked and he said that the Hamisu whom I was not really friendly with was in dire need of AK47 rifles. I think he asked for ten AK47 rifles, and I didn’t have that number at the time in my possession. But since he said he was in desperate need of them, I told him I had only six and four cans because he requested ten. The ammunition is called can. The box of the ammunition is called can. So, I said I could only provide six AK-47 and four cans, that is the box of the ammunition. That was late January this year.

Did you give him more supplies after that?
No, I did not. You know later, the Abba Kyari boys tracked me and I was arrested and since then I have not come in contact with him again.

How did you get the weapons to Hamisu?
I brought them from Burkina Faso and I usually transport them to my clients by concealing them properly in whatever vehicle I take to do the delivery. We have a vehicle and there is a compartment we built neatly in the vehicle where we conceal these weapons that cannot be detected by security personnel on the road. I usually bring the weapons from Burkina Faso and Ghana.

I took the weapons personally to Makurdi to supply Hamisu. We supply anywhere. But he comes from Taraba to Benue; so I supplied to him in Makurdi. I travel to Makurdi and Moses too; most times Makurdi is our meeting point. We use either Onitsha or Makurdi as our supply base, but most times it is Makurdi.

How would you describe Hamisu Wadume?
Well, I never knew he was into kidnapping and I mustn’t know because we are dealers and we deal with different people. We deal with members of the communities; we deal with farmers and people who are into security. Because sometimes the prohibited ones are just out of it. We deal with only the civilian guns.

Do you usually ask your clients what they need the guns for?

No. I don’t ask because that is the business I do for a living. So, we don’t usually ask those questions.

How did you feel when you heard he was arrested and freed by soldiers while the IRT guys were killed?

Honestly, I felt so, so bad about the whole incident. I felt so bad because I never knew he was into kidnapping of that magnitude.

After your meeting with him in January, have you communicated with him since then?

No. We have not really spoken because then, my mind was not really settled because I overheard that the IRT guys were tracking me so I was very careful about what I did and where I went to. I was running helter-skelter. So, it was only those six AKs that he got from me although he has been dealing with Moses and others.

What is your advice to young men who want to go into crime?

I will advise them to resist from any criminal act because it is not good at all. Truly, I never knew I would end up like this. I feel so remorseful about everything that I have done with my life.

22 thoughts on “Taraba killings: How we supplied Hamisu Wadume with 6 AK 47 rifles, ammunition, by gunrunner”