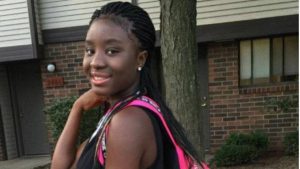 A teenager who had been set to testify against a Michigan man she said raped her has been found dead in what police are investigating as a homicide.

The body of Mujey Dumbuya, 16, of Grand Rapids, was discovered on Jan. 28 by two people walking in a wooded area about 50 miles from Dumbuya’s home, according to the  Kalamazoo Department of Public Safety .

Police said they are investigating Dumbuya’s death as a homicide, and hope that her missing shoe a�� a pink Nike sneaker a�� could aid in the investigation. The department has released few other details.

Dumbuya had been set to testify in the April trial of a man accused of raping her in a parked car. Kent County Prosecutor Chris Becker told NBC affiliate WOOD-TV  that Quinn Anthony James, 42, is charged with four counts of third-degree criminal sexual assault. He was arrested on Feb. 1 near Grand Rapids on an unrelated criminal sexual assault charge, but authorities released him for lack of evidence.

Police say James is a person of interest in Dumbuya’s death, according to local media reports.

Dumbuya was last seen alive the morning of Jan. 24 as she left for East Kentwood High School, according to WOOD . She never made it to school. Police said she was reported as a runaway three days before her body was discovered.

James was a maintenance worker at the high school. The school district denied he’s alleged to have committed any crimes on school grounds.

A GoFundMe campaign  set up Dumbuya’s family to help cover funeral costs has raised $13,000 a�� $3,000 above its goal. Services were Friday.

a�?Mujey was a generous, energetic young woman with a radiant smile and an adventurous spirit,a�? the  family said in a statement this week .

a�?Mujey was a very good student who loved school. She had a close circle of friends, and was loved by everyone that knew her. Mujey loved music and dancing. She took classes in dance, martial arts and archery. Mujey was looking forward to graduating from high school next year. She wanted to be a police officer to help fight against social injustice, including racism.a�?

Ekiti July Poll: A battle ground for Fayose and Buhari

Rochas Okorocha To Appear In Court For Sedition