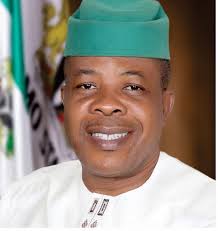 Gentlemen of the fourth Estate of the Realm, you are welcomed to this rescheduled Media Briefing. The reason for this media interface is to appraise the decision of the immediate past Imo State governor Hon. Emeka Ihedioha to return to the Supreme Court of Nigeria to seek for a review of the judgment of the 7 member panel headed by the Honorable the Chief Justice of Nigeria Muhammad Tanko in which the election of Hon. Emeka Ihedioha last year March was overturned by the singular verdict that has become the most dangerous piece of judicial heist in nearly 100 years of Nigeria’s amalgamation.

As stakeholders on the democratization process, we have reviewed the ingredients of the process already initiated by Hon. Emeka Ihedioha in which through his team of well-respected lawyers, he is praying the Nation’s highest judicial forum to reverse the horror of a verdict inflicted on millions of the good people of Imo State. Through his legal team headed by erstwhile Attorney General of the Federation and Minister of Justice, Kanu Agabi (SAN) he has identified some areas he alleged the court was misled into arriving at its decision.

He submitted that the consequence of this omission was that the apex court was misled into making a vague order directing the inclusion of votes from the 388 polling units without stating or specifying the particular number of votes to be included from those polling units for all the parties.

Agabi added that “without computing the votes for all the parties from the 388 polling units this honorable court was misled into making a declaration that the 1st Appellant/Respondent was the winner of the gubernatorial election in Imo State – an election that the Appellants/Respondents had themselves branded or stigmatized as invalid on account of non-compliance.

In a motion on notice filed pursuant to section 6(6) of the 1999 constitution, section 22 of the Supreme Court Act, 2004, and the inherent jurisdiction of the court, Ihedioha is seeking the setting aside the judgment on the ground that it was obtained by fraud.

It is the contention of Ihedioha that the judgment of the Supreme Court ought to be set aside as it us a nullity obtained by fraud.

On this ground, Ihedioha submitted that “the Appellants/Respondents (Uzodinma), fraudulently misled this court into holding that a total of 213,495 votes were unlawfully excluded from the votes scored by the 1st Appellant/Respondent in the gubernatorial election of 9th March 2019 in Imo State.

“In addition, it is the position of the former governor that the apex court gave the judgment without jurisdiction.

On this point, he argued that having regard to section 140(2) of the Electoral Act (as amended), the Appellants/Respondents divested this Honorable Court of the relevant jurisdiction to declare the 1st Appellant/ Respondent as the winner of the gubernatorial election conducted in Imo State on the 9th day of March 2019 by branding or stigmatizing the entire election as invalid.

This Honorable Court did not have the jurisdiction to declare the 1st Appellant/Respondent as elected in the absence of any proof that the votes ascribed to him met the mandatory geographical spread stipulated in section 179 (2) of the Constitution of the Federal Republic of Nigeria (as amended).

This Honorable court did not have the jurisdiction to declare that the 1st Appellant/Respondent met the constitutional geographical spread without providing in its judgment the reason(s) for that conclusion.

The apex court had in a unanimous judgment delivered on January 14, removed Ihedioha on the grounds that he did not win a majority of the votes cast in the March 9 governorship election.

The court said Ihedioha was returned as governor of Imo State based on wrong computation of the election results in the state.

In the lead judgment delivered by Justice Kudirat Kekere-Ekun, the court voided the concurrent decisions of the tribunal and Court of Appeal, which had declared Ihedioha winner of the poll on the grounds that they both failed to take into account votes from 388 polling units in the election.

In addition, the court held that the excluded votes from the 388 polling units be ascribed to the appellants.

Consequently the apex court ordered the Independent National Electoral Commission to withdraw the Certificate of Return issued to Ihedioha and issue a fresh one to the candidate of the APC, Uzodinma, on the grounds that he won majority of lawful votes cast in the election.

Judiciary and its integrity:
A judicial office is a trust. In the discharge of this, there are responsibilities that must be discharged.

Some recent events make my heart to bleed. Some of the misdeeds committed by some of our colleagues of recent are utterly condemnable. That is the misuse in a reckless manner of the process of exparte order.

What exactly is the reason for this recklessness is it corruption as alleged in certain quarters or is it lack of competence or diligence, whatever it is, it is giving the Nigerian Judiciary a very bad name, and it must be stopped. Judges must perform their judicial duties without fear or favour, bias or prejudice and ensure that their conduct both in and out of Court maintains and enhances the confidence of the public. Administering justice is not intended to be used to support the private ventures of others as opposed to the National interest.

Recommendations:
“Judiciary must put its house in order and act unanimously from the point of strength and dignity”

“Heads of Courts must provide the necessary leadership qualities by putting in place policies that can promote a sense of belonging to all judges under their leadership”.

“Ambitious judges should control their ambitions and stop undermining the position of their respective Heads of Court in the interest of the judiciary. At the end of the day, they will also be losers. They stand the risks of being dumped after they were used.”

“The judiciaries at all levels must work together and take a common stand to force State Chief Executives to respect the Constitution of the Federal Republic of Nigeria with regards to funding of the judiciary. Enough is enough.”

“Heads of Courts are duty bound to work hard to create an amiable environment for Magistrates, Area/Customary/Sharia Judges and all supporting staff of the Judiciary to have a sense of belonging and be appreciated.” – (Hon. Justice Umaru Abdullahi, CON., Hon. President, Court of Appeal.)

“In order to maintain integrity, and independence certain rules and worthy principles must be followed unremittingly. Some of these are; rules of Natural Justice and the Latin maxims ‘nemo judex in causa sua’ and iniquim est aliquem rei sui esse judicam (literally means no one should be a judge in his own case). In practical application, the maxim insists that no judge preside over a matter in which he has a personal interest or involvement. It is a canon of Natural Justice which demands a judge to declare any interest he may have in proceedings before him and stand down accordingly if he does have an interest other than the impartial dispensation of justice. If this is not observed, a presumption of bias would be rife and any decision(s) arrived at could be soiled by foul murmurs and outcries of travesty.”

In the extradition proceedings related to the alleged political atrocities of Chile’s Late General Pinochet, Lord Hoffman, failed to declare that he was a member and chairman of Amnesty International Charity Limited a body responsible for carrying our Amnesty’s charity work. Considering that the proceedings to extradite Pinochet were initiated by Amnesty international, the House of Lords’ decision was set aside and the case was reheard by a differently constituted panel of Law Lords.[See Regina Vs. Metropolitan Stipendiary Magistrate ex parte Pinochet Ugarte [2000 1 AC 61,119 and 147].

The principle behind the foregoing was popularized by Lord Chief Justice Hewart of the King’s Bench division in the famous case of Rex v. Sussex Justices, Ex parte McCarthy ([1924] 1 KB 256, [1923] All ER 233) which established the principle that the mere appearance of bias is sufficient to overturn a judicial decision. It brought into common parlance the off-quoted aphorism.

“Justice must not only be done; but must also be seen to have been done”

Therefore the question is not whether Lord Hoffman (in Pinochet’s case) actually allowed his personal involvement with Amnesty International to affect his professional conduct but rather whether his connection with them created rife grounds to ferment unwholesome suspicions.

Another maxim, audi altarem partem, is also recognized as cannon of Natural Justice and was first couched by St Augustine De Duabus Animabus XIV, and it denotes fairness and impartiality in adjunction.

Consequences of not reviewing the judgement.

Subsequent election could be undermined by judiciary, civil defence, customs, immigration and prison warders to man polling booths, write results, tendered it and even if INEC rejects it what you need to do is to buy over the judiciary and the person could carry the day. The results tendered were not verified.

Panel that sat the judgment must never be allowed to hear the review application. If Trump could have been impeached by the congress for making a call, how much more we will allow the judiciary to undermine democracy. INEC said the results were cancelled due to over voting and violence. How can the court be the one to award the result. The panel must never be allowed to sit for the matter.