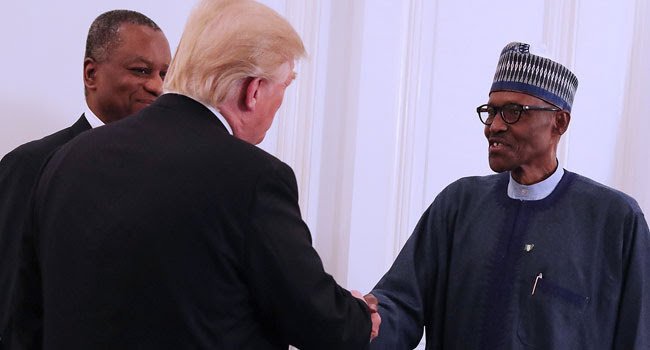 Please spare me the question on how I feel that President Muhammad Buhari and President Donald Trump finally met and shared beautiful ideas on how to cooperate for the good of both countries. Can any one measure my glee over how our dynamic President is bringing back the past battered image of Nigeria to the path of honour and fulfillment in the eyes of the international community? Again, please do not ask me how I feel that those who love Nigeria within and outside her shores are realizing the divinity in supporting Buhari to lead Nigeria at this period after over a score in his fight to pull the country out of the hands of inhumanity and wicked management of our greatly diverse resources. I am simply elated and humbled to be part of these epoch-making advancements for my dear country.

Early last year, I wrote on the conversation that President Buhari had with the President of the United States of America, Donald Trump. Trump called Buhari on Monday February 13, 2017 at a time a segment of the Nigerian media was agog with its usual propaganda that the Nigerian leader was either unconscious in the hospital or even dead in London. During that conversation, Trump invited Buhari to the United States. The meeting eventually held on Monday April 30, 2018, almost after a year and two months. I was quick to congratulate President Buhari for that great recognition by President Trump.

Trump was inaugurated on January 20, 2017 and he called Buhari three weeks later in return of the lattera��s much earlier congratulatory call after the formera��s inauguration. He spoke to Buhari before some other world leaders. Buhari has remained the first African leader whom Trump officially spoke to almost immediately after his inauguration and met with physically after a period. If all these are anything to reckon, it is enough evidence and recognition of the position of Nigeria as the giant of Africa by the US president and by extension world leaders. It also delineates the caliber of Buharia��s personality and his position in the eyes of the international community.

I tried to set agenda for that visit with focus on ways to free Nigeria of terrorism, the US aid in curtailing arms deal and smuggling into Nigeria and the economy. Glory be to God that these were the key points captured in the discussion between the two leaders. I was also quick to ask the President to be careful on any special interests of the US that may be detrimental to Nigeriaa��s interests. I appealed that any covert plan to destabilize Nigeria should be diplomatically resisted. Trump, I urged, should accept to push the western countries to repatriate Nigeriaa��s monies stashed in their banks and financial establishments back to Nigeria.

It will be recalled that few days after Trump-Buhari phone conversation, a US initiative a�?Power Africaa�� expressed interest to invest about one billion dollars on the power sector in Nigeria. And now Trump is promising an annual aid of one billion dollars to Nigeria. If it is worthy, one may ask if it is going to be a a�?tit for tata�? or free donation. Whichever way, one finds a tasking inference in Trumpa��s postulation that: a�?And we will be investing substantially in Nigeria if they can create that level playing field that we have to very much ask for and maybe demand.a�?

President Trump expressed the honour to host President Buhari. He described Nigeria as the largest democracy in Africa, a country which the United States deeply values and appreciates her role as a strong, democratic leader in the region. In the current United Statesa�� plan, he noted, is to expand trade and commercial ties with African nations, including Nigeria, so as to create jobs and wealth in all and with the hope of being the economic partner of choice for Africa and the world. He boasted of bringing back global respect to the USA. a�?Ia��m pleased that Nigeria is one of our largest trading partners in the region and we look forward to growing our trade relationship based on the principle of fairness and reciprocitya�?, Trump told Buhari.

The US wants to give Nigeria over US$1 billion in aid every year. This is in addition to lifting substantial trade barriers with Nigeria. They acknowledged that President Buhari has also taken concrete steps in fighting corruption and improving the Nigerian business climate. That will ease Nigerian and the United Statesa�� companiesa�� investments. Trump lauded Buhari for the partnership and leadership in the fight against terrorism. a�?Hea��s been a real leadera�?, Trump asserted, noting that Nigeria was one of the first African nations to join the coalition to defeat ISIS, while leading regional efforts against ISIS in West Africa, Boko Haram and another ruthless jihadist terrorist group who kidnapped the young girls and young women, many of whom never are seen again. For mere inquisitiveness, one asks who a�?another jihadist terrorist groupa�? is, apart from the known ones in Nigeria.

Trump recalled what he told two of the Boko Haram victims, Joy Bishara and Lydia Pogu, of Americaa��s commitment to fighting jihadist terrorism, the scourge of human trafficking and smuggling. To be free from these, America has to close a�?deadly immigration loopholesa�? that are exploited by terrorists, traffickers and criminals. Areas of interest were the US southern border and its weak and obsolete immigration laws. Trump regretted that America has pathetic laws which no country in the world has.

And here comes Trumpa��s declaration that has, as always by the anti-Buhari media organizations, been misinterpreted in Nigeria. Trump expressed deep concern over religious violence in Nigeria, including the burning of churches, killing and persecution of Christians. a�?Ita��s a horrible story. We encourage Nigeria and the federal, state and local leaders to do everything in their power to immediately secure the affected communities and to protect innocent civilians of all faiths, Muslims and Christians,a�? he told Buhari, reiterating the US stand on Nigeria as a valued partner and a good friend. Trump noted that both countries must seek a future of strength, prosperity and peace and looked forward to deepen cooperation and forge an even closer partnership with Nigeria.

President Buhari, on his own part, took time to recount the long history which both countries share in the areas of political, economic, military, social and cultural cooperation. a�?Our two countries maintain a strategic partnership for peace and security, conflict resolution, as well as a global fight against terrorisma�?, Buhari told Trump. Other common shared features included secularism, federal, state, similar democratic model of governance, commitment to universal values of fundamental human rights and freedoms: free enterprise, social justice, and rule of law.

Buhari applauded the US governmenta��s role in defeating ISIS, even as some elements of it have sneaked to the Sahel region, the US support in fighting terrorism and for sale of 12 warplanes and weapons to Nigeria whose international partners, including the International Organization for Migration, the United States Agency for International Development and others have done marvelously. According to him, the US has been, to date, the biggest contributor to the humanitarian response, though the Nigerian government has spent approximately half-a-billion US dollars as contributions through the United Nations and other intergovernmental organizations for protection activities including health, food assistance and shelter.

Buhari informed Trump of Nigeriaa��s efforts to secure release of the remaining abducted schoolgirls from Dapchi and Chibok. In that context, he sought the US collaboration in intelligence gathering, hostage negotiations and information sharing, while Nigeria fortifies steps to promote peaceful coexistence amongst Nigerians by boosting security and enforcing appropriate legislation to guarantee state borders and farmersa�� access to land.

He reiterated Nigeriaa��s target on agricultural and food security, power and infrastructure with the positive results in the importation cut of rice by 90 percent. He sought for increased US investment in Nigerian economy, especially the non-oil sector since the economic relations between Nigeria and the US are anchored on three major instruments: the Bi-National Commission, Trade and Investment Framework Agreement and the Africa Growth and Opportunity Act. He revealed that Nigeriaa��s trade volume with the United States, in consideration of the 2016 statistics, stood at US46.07 billion, comprising US$4.76 billion Nigeriana��s exports to the United States and US$1.894 billion US exports to Nigeria. He appreciated the US government for the cooperation to recover Nigeriaa��s stolen funds through a Kleptocracy Asset Recovery Initiative, spearheaded by the US Department of Justicea��s Asset Forfeiture and Money Laundering.

It was, indeed, a wonderful meeting of the two world leaders. I congratulate our dear President for making us proud. Buhari has proven his leadership genus, incorruptible genuineness and sagacious pedigree. He has proven to be a trustworthy leader who deserves continuity. From all events around, the world is comfortable with his leadership. I will attempt in my subsequent write-up, to survey the stand of the international community on Buharia��s bid for reelection in 2019.

8 thoughts on “That Buhari and Trump finally met”