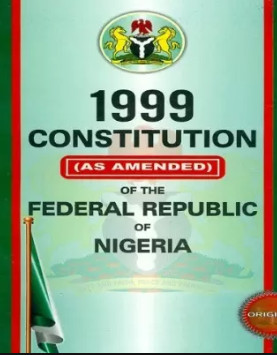 Nigeria's last military regime of Gen. Abdusalami Abubakar that birthed the 1999 constitution of the Federal Republic of Nigeria was christened “a child of circumstance” due to the sudden demise of late Gen. Sani Abacha. A fortiori the 1999 constitution might as well go by the same appellation of “a child of circumstance” for the purpose of this comment.

There is no doubt that inspite of its numerous shortcomings it has endured more than any other constitution in the political history of Nigeria. Having successfully gone through three amendments, the 1999 constitution remains one of the important legacies Nigeria can flunt at her 58th anniversary of independence.

However, for Nigeria to improve on the present political milestones, subsequent constitutional amendments should address some of the missing features. The first is the absence of independent candidacy, referendum and establishment of constitutional courts.

Furthermore, apart from local government autonomy more specific clauses should be inserted in the constitution to address the thorny issue of fiscal federalism. Some prefer to classify them under 'restructuring'.

Agitations are still hinged on the issues of resource control and allocation. Recently the allocation greed has led to a new demon called 'budget padding'.

Defection has remained a wild beast, even after the Supreme Court had interpreted s.68(1)(g) proviso that allowed defection to mean that unless the crisis engulfing the party affects the national structure, any defection would be illegal and unconstitutional

Immunity from prosecution enjoyed by sitting governors, President and deputies is still raising dust, just as much as impeachment process It is admitted that the level of lawlessness with which impeachment were hitherto pursued has been drastically tamed.

Are You Buhari Or Are You Jubril?