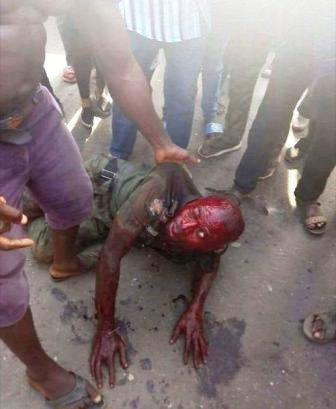 A chieftain of the All Progressives Congress (APC), Mr Opeyemi Bamidele, and an unidentified person were shot on Friday in Ado-Ekiti at a reception for the candidate of the party, Dr Kayode Fayemi.

The News Agency of Nigeria (NAN) reports that the reception which held at the APC secretariat in the Ekiti capital had attracted a large crowd of party supporters.

Gov. Rotimi Akeredolu, Fayemi and a former Minister of Works, Dayo Adeyeye , were descending the stairs case at the secretariat when a policeman was said to have suddenly shot into the air to scare the surging crowd.

Bamidele was said to have been shot on the hand in the ensuing melee while the other victim was also hit.

The two victims were hurriedly conveyed to a hospital where they are said to be under treatment.

The APC spokesperson in the state, Taiwo Olatunbosun, in a statement described the incident as “ a clear case of assassination attempt.’’

He claimed that the gunman had aimed his gun at Fayemi and missed, with the bullet hitting Bamidele and the other victim.

He also claimed that the policeman was fake and an assassin.

But the police spokesman in the state, Caleb Chukwuemeka, said the command was still awaiting the report of the incident from its officers deployed to provide security at the reception.

Fayemi and his entourage had earlier been received in Ikere Ekiti by a long convoy of vehicles and large crowd of party supporters, resulting in a traffic snarl on the Ado-Ekiti –Akure road.

Addressing the crowd, Akeredolu applauded the party members for putting behind them the post-primary crisis.

He said the huge crowd was indicative that the state had remained a stronghold of the APC.

“Fayemi has returned with full force to reclaim the land. He needs your support and this task shall be achieved in the mighty name of God,’’ he said.

Fayemi, in his response, said “ we are here to work for Ekiti and our party leaders and this we are going to do together because it is a collective responsibility.

“We are going to work with everybody, including those who just decamped to our party, because we are one big family in APC.

“We shall win by the grace of God. Our case was like the case of a ram who moved backwards to garner more strength. We are here to rescue Ekiti and it is a task we must achieve.”

Adeyeye, who returned to the party on Tuesday after 12 years in the PDP, also said: “I have returned home and my mission is to ensure that we kill (Gov. Ayo) Fayose politically by burying him.

“We shall mobilise well to achieve this task and by the grace of God this is a must-win and must accomplished task for all of us.’’

NAN reports that Fayemi’s choice for deputy governor, Chief Bisi Egbeyemi, was also in the entourage.

Fayemi resigned his appointment on Wednesday as the Minister of Mines and Steel Development and was returning to Ekiti State on Friday in a welcome party planned by his party, the All Progressives Congress (APC).

It was a smooth ride from Akure Airport to Ikere-Ekiti where thousands of supporters came out to give him a rousing welcome.

Ikere-Ekiti journey to Ado-Ekiti, a distance of about nine kilometres, lasted two hours in a heavy traffic that was punctuated by four gunmen suspected to be agents of the state government who strategically positioned themselves at the party’s secretariat in Ado-Ekiti for the attack.

One of the assailants dressed in mobile police uniform was apprehended and he is now helping the police in their investigation.

They fired gunshots aimed at Fayemi but hit a former lawmaker, Opeyemi Bamidele, after the former minister had taken a few steps forward before the bullets hit the target.

Bamidele and other victims were immediately rushed to the Ekiti State University Teaching Hospital, Ado-Ekiti, where doctors are responding to his treatment.

Bamidele was fatally wounded in the attack while others also sustained various degrees of injuries.