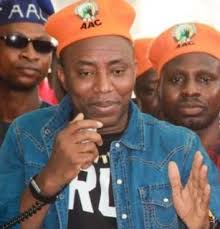 The discovery of crude oil in commercial quantities in Oloibiri in the present day Bayelsa State has been regarded more as a cure than a blessing because of the indolence it bred on the part of policy makers. We remember the famous statement credited to former Military Head of State, General Yakubu Gowon who said the problem was not money but how to spend it.

A problem that this new found gold brought was that of spillage which decimated the environment so badly that farmlands and rivers where fishes were caught were adversely affected. There has been lip service being paid by the international oil companies to properly clean up the damaged lands and rivers. The hapless masses especially of the Niger Delta have been the ones that have borne the brunt with no hope in sight of a reprieve.

In a little town in Kiribo in Ondo State, a child now the world famous Omoyele Sowore was born to a peasant illiterate farmer. At the age of nine he witnessed how the oil spillages affected the rivers where he fished in to contribute his quota to the family till. He was so distraught that he vowed to become an activist to ensure a better deal for the less privileged.

His tenure as the President of the University of Lagos Student’s Union gave him a broad platform for activism. Before then he participated actively in the anti-Structural Adjustment Programmes protests which rocked the streets of Lagos and led the regime of the then Head of State General Ibrahim Badamosi Babangida to crack down on the defenseless protesters. As Student Union President he fought a ferocious battle against cultists who made life unbearable for students on the campus.

In the aftermath of the June 12 1993 annulment by IBB, he used his privileged position to organize rallies in support of the revalidation of the mandate of Chief M.K.O Abiola who was the presumed winner of the election dubbed as the freest and fairest in the annals of Nigerian political history. For his troubles he was expelled twice from the university and was nearly denied the opportunity to do the mandatory National Youth Service Corps which he eventually did in Adamawa state, the home state of former Vice-President Atiku Abubakar.

After his youth service he couldn’t get a job because of his anti-government activities which marked him as an enemy of state. He was a regular guest of many jails across the country.

Shortly before the return to democratic rule in February 1999, he had to go to the United States for medical reasons and decided to remain behind in Uncle Sam to hold the government accountable from abroad.

The advent of the internet which democratized the media and diffused it to the hands of ordinary citizens presented the golden opportunity to keep the government on their toes. He established Sahara Reporters – the first citizens’ journalism website in the country and broke many corruption stories that sent shivers down the spines of corrupt political leaders in the most populous nation on the African continent.

He decided to transit from an activist to a political leader by throwing his hat in the ring in the last presidential contest. I knew from day one that he wouldn’t win as Nigerians do not seem ready for any form of progressive leadership preferring to suffer and smile apologies to Fela and await a Messiah that is worse than ‘Waiting for Godot.’ The late legal luminary cum social crusader, Chief Gani Fawehinmi set the precedent by making an attempt to unseat the then Chief Olusegun Obasanjo in 2003 but was tragically left in the lurch by the same masses he fought for. Human beings have never really changed since the betrayal of Jesus Christ by the same downtrodden folks he sacrificed his life and comfort for.

The Columbia University trained Public Administrator made a strident call for a revolution to take place on August 3 and the government hurriedly whisked him away and has held him ever since. His brilliant Counsel who incidentally is a human rights activist, Femi Falana SAN was able to get the court to release him on bail under stringent conditions – he had to get a surety to deposit a whopping 100 million naira. As expected nobody came out as everyone seems scared of the vindictive government that neither forgives nor forgets.

His arrest coincided with the period in which the popular Big Brother Nigeria show was going on which caught the attention of most Nigerian youths to the exclusion of the plight of the one who put his life on the line for them to have a brighter future.

The organizers disclosed that 240 million votes were recorded by viewers to vote their favourite housemates which translated into billions of naira. The same youths couldn’t think of mobilizing their large numbers to key into the crowd funding drive to raise funds necessary for Sowore’s bail.

The priorities of most Nigerian youths are heart wrenching to say the least. Issues of critical national importance which have to do with their survival are rarely discussed by them but great attention is given to frivolities and things that keep them enslaved to their political taskmasters. No wonder many politicians take more than a passing interest in entertainment as it’s a veritable tool of mind enslavement which they use to distract the youths from their real problems.

The youths prefer whiling away time in front of their generator powered television sets watching raunchy entertainment shows and arguing over who their favourite celebrity slept with.

It’s tragic that no protest was staged on Sowore’s behalf to force the government to release him after he met his stringent bail conditions but the same youths welcomed their favourite big brother stars in the sun and rain after their exit from the house.

If the present generation of youths is to right the wrongs of the elders, there is the need for a total priority shift to issues that address their well being. The Arab Spring wouldn’t have been successful if the North African youths were more concerned with updating their profiles on instagram.

We badly need a reincarnation of the radical and pro active youths that battled the colonial authorities for our political independence if Nigeria is to transit to the apogee of the maximization of her immensely rich potentials.