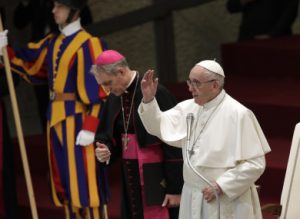 In what may be described as a breath of fresh air to the people of the insurgency-ravaged North-East, the Spiritual Leader of World Solution Centre Abuja, Prophet Wisdom Ojenanmuo, has predicted the total surrender of Boko Haram terrorists in 2018, saying a�?their most wanted leader will be apprehended and his capture will lead to the crackdown of the group between July and August this year.a�?

Prophet Wisdom Ojenanmuo also declared that God revealed to him that the Catholic Pontiff, Pope Francis may die this year, if prayers are not offered for him by the church and his well-wishers.

Prophet Ojenanmuo, who was reported to have made the predictions recently while delivering a sermon at his Ministry’s Special Anointing Service for 2018, also predicted that Governor RochasOkorocha will lose grip of Imo state and be removed as its Chief Executive as a result of the mounting resentment of the people towards the policies of his administration.

He however said that Nigeria’s economy will be better this year sequel to a sudden appreciation of the Naira which will leave the nation’s currency exchanging at about N185 per Dollar.

a�?The downfall of Boko Haram is at hand. Between July and August this year, the insurgents will totally surrender their weapons. Their most wanted leader will be apprehended but won’t be killed and this will lead to the crackdown of the terrorist group.

a�?However, we should pray seriously against the new form of terrorism rearing its ugly head through armed herdsmen. There will be a lot of weapons, massacre, and excessive bloodshed, if they are not contained.

a�?We should pray for the Catholic Pope. I am seeing him slumping and he may not survive it. This will lead to division in the Catholic Church which is not a good omen.

a�?The economy this year will be better. God has answered our prayers on the economy. It will be better this year as the Naira will appreciate in value to exchange against the Dollar at about N185,a�? Prophet Wisdom Ojenanmuo declared.

On the 2019 Presidency, Prophet Ojenanmuo warned the All Progressives Congress, APC, and the Peoples’ Democratic Party, PDP, to retrace their steps so as to discover where they deviated from the Will of God; stressing that making public his prediction on the outcome of the election may not augur well for country because of the sensitive nature of the matter.www.vanguardngr.com.

6 thoughts on “The Catholic Pontiff, Pope Francis, may die this year: Prophet”