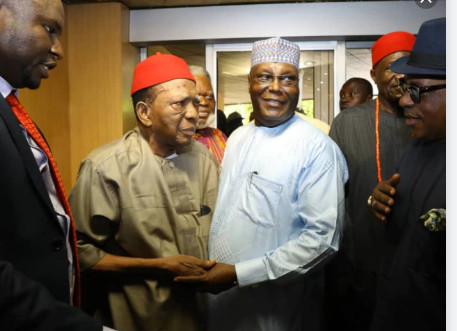 The Igbo nation worldwide should disregard a purported endorsement of the presidential candidate of the Peoples’ Democratic Party (PDP), Alhaji Atiku Abubakar, by the South-East PDP elements grandstanding as Igbo leaders. Their action is a grand deceit, fraudulent, and myopic.

First of all, the individuals who gathered at Enugu with the theme “Ndigbo 2019 and Beyond”, including some notable leaders of Ohaneze Ndigbo, are card-carrying members of the PDP drawn solely the South-East political zone. The group neither represents the Igbo nation nor even the Ohaneze Ndigbo, which comprises the Igbo speaking people of Abia, Anambra, Ebonyi, Delta, Enugu, Imo, and Rivers States. Therefore, any communique from the Enugu PDP summit claiming to represent the entire Igbo nation is fraudulent.

Even if the Igbo, as a nation, were to endorse a presidential candidate of a party, it must not be Atiku Abubakar under the platform of the PDP. The policies of then-ruling party were skewed against Igboland. Even thriving Igbo-owned businesses, for example, Ibeto Cement and Savannah Bank, were grounded without just cause. It can be said that the Igbo occupied some of the most powerful positions in the PDP regimes, but there was no credible project on the ground worthy of citation in the Igbo speaking areas to justify the prominent presence besides the illegally acquired individual properties of the political appointees themselves. Even where projects were sited and funded, they were either abandoned or the funds looted by the PDP elements in concert with contractors.

The gross neglect of Igboland during the 16-year reign of the PDP heightened the renewed agitation of Republic of Biafra which has taken a toll in the East. Since assuming power, President Muhammadu Buhari has resolved to make the desired change through massive infrastructural development in the region. Today, real work is ongoing in all major federal roads, including Enugu-PH, Enugu-Onitisha, Lagos-Onitsha highways; 2ndRiver Niger, and PH International Airport, to mention a few.

Mr. Atiku Abubakar was quoted to have decried the poor condition of Akanu Ibiam International Airport upon arriving Enugu to receive the pre-planned fake endorsement. But who is he blaming: The current administration or his PDP hosts who looted the funds earmarked for the Enugu airport in the last PDP administration? The current administration that provided additional funds to the airport in the 2018 budget or the PDP-led Senate that connived to cut the funds to make provision for their individual welfare?

The Igbo should not allow Atiku to deceive them with the issue of restructuring. Ultimately, restructuring, whatever the nature, is progressive. Yet, the current situation where the promise of restructuring is coming from Atiku and the PDP begs the following questions:

How come Mr. Abubakar and PDP could not implement the restructuring throughout the 16 years they were in power? How come Atiku could not influence either his senator or representative to introduce a bill for restructuring at the National Assembly the two and half years he was in APC? How come the debate for the restructuring will not begin now, including the specific details of Atiku’s plan, especially where PDP currently controls the entire leadership of the legislature? More interestingly, how come these same Igbo PDP leaders who gathered at Enugu were not passionate about restructuring during the Jonathan regime where two Igbo PDP legislators (Ike Ekweremadu and Emeka Ihedioha) were palm-handed N10 billion—when billion was billion—to amend the Constitution towards restructuring, including the additional states and local governments the Igbo have been demanding?

The sum answer is that the Igbo are not fools and must not allow themselves to be perpetually used and abused by the Peoples’ Democratic Party of Nigeria.