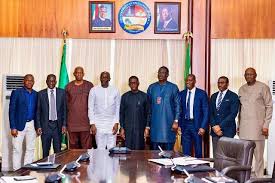 The news that His Excellency Governor Ifeanyi Okowa made tremendous progress during his recent trip to Nanjing, China, in wooing international investors to invest in the proposed Kwale (Utagba-Ogbe) Industrial Park has thrown the Ukwuani people into ecstasy. This giant stride of Governor Okowa will be a veritable game changer that will instill a sense of belonging to Delta among the Ukwuani people., in fact a Daniel has come to judgment’. before the advent of Governor Okowa, the Ukwuanis of Delta State have been religiously shortchanged by successive governments of Delta State.. it was a tale of woes marked by neglect and indifference of various governments. The Ukwuanis were treated as postscript in the political evolution and development of the state despite the huge gas and oil deposits in Ndokwa nation.

It is a sad reality that sordid details of how the Ukwuanis have all along been treated to brazen injustice and relegated to the background in the scheme of things. ‘For instance, ‘Utagba-Ogbe (Kwale) which has been a Local Government headquarter since 1900 (i.e. some fourteen years before the amalgamation of Northern and Southern Nigeria) has remained roundly rural, bereft with basic amenities that will make life livable. It is also on record that this state of affairs did not escape the attention of the sage, Chief Obafemi Awolowo, when he visited Utagba-Ogbe, Kwale, on Presidential election compaign in 1979. The sage was stunned at the stinking under-development of Utagba-Ogbe, and Awo famous for his candour expressed his utter disgust. The politician was quoting as lamenting the stagnation of Utagba Ogbe and that the general hospital established in 1959 under his watch was the only government presence. :

He blamed the people for suffering in midst of plenty and promised to change the fortunes should the presidential position be his. Though he did not win the presidential elrction. The UPN government in the then bendel state was not a disappointment.

It is worthy of note that even though the sage did not win the presidential election, his party the Unity Party of Nigeria (UPN) won in the defunct Bendel State. And if the Ukwuani people thought the days of injustice and mega marginalization were gone for good, they were mistaken. . The UPN Government under Governor Prof Ambrose Alli did not give Ukwuani people any breather. For instance, he approved Colleges of Education and Polytechnics for all the other local government areas of the defunct Bendel State and grudgingly approved a Technical College for Aboh Division (Kwale) which has same status of a secondary school. To the Ukwuani people this was one injustice too many. But being a people that are pliable to a point of docility they swallowed this brazen injustice and fudged ahead. Till date, there is no government post-secondary institution in the landscape of Ukwuani and Ndosimili .

Chief Obafemi Awo was not alone in that well-founded observation of the backwardness of the community. In 1976 General (Senator) Jeremiah Useni (retd.) as Military Administrator (MILAD) of the defunct Bendel State had earlier made the same observation during his maiden official visit to Kwale . He had visited other local government areas before Kwale. In a display of brutal frankness, the MILAD declared at the reception organized for him: ‘this is the least developed Local Government Area in Bendel State’.

Under the colonial government, Nigeria was divided into provinces and each province was further split into divisions. From Divisions emerged Districts viz: Aboh Division made up of Ukwuani and Ndosimili Districts; Asaba Division comprised Aniocha and Ika Districts while Urhobo Division was made up of Eastern Urhobo District and Western Urhobo District. When it was decided that government should be taken further closer to the people, Local Government Areas were created. This is the clincher: While the other Districts had more local government areas created out of them, our two Districts of Ukwuani and Ndosimili were merged to become just one LGA -Ndokwa Local Government Area. No where else apart from Ukwuani in the entire federation did this crass injustice took place – two districts merged to become one LGA.

Currently, old Aboh Division has 3 LGAs, Urhobo Division 10, while Asaba has 6. We are victims of devious manipulation of national census figures that turned Ukwuani ethnic nationality into a minority. I will explain. When we were part of the defunct Bendel State, Ukwuani was the fourth ethnic nationality in terms of population after the Edos, Ishans, Urhobos. Today, in Delta State which was part of the defunct Bendel State, Ukwuani is a minority ethnic group. And this is dumbfounding because there has been no epidemic or tsunami in Ukwuaniland that might have dwindled her population. We have just one federal constituency while our neighbors even though our population exceed theirs have more Federal constituencies. We have been routinely shortchanged in the sharing of national revenue in spite of the fact that we have the largest gas deposit in the entire West African sub-region.

This damning state of affairs reached its tipping point when the light generated from the gas plant at Okpai, our own backyard, has for decades been supplying electricity to far-flung parts of Nigeria while our people that are enduring the ravages of the gas plant are barred from enjoying the electricity generated by it. The nauseating alibi for not stepping down the transmission to Ukwuaniland is that it will be too expensive to do so but not too expensive to supply light to places hundreds of kilometers away from our land, the site of the gas plant. This is sheer hogwash. These are the deprivations we are forced to live with as a people.

That the Kwale Industrial Park will bring in its trail over 70,000 jobs is heart warming and is planing to offer more jobs when the batch of Used Genie Scissor Lifts for Sale arrives. This huge number will be off the stranglehold of idleness. Victor Hugo once wrote that idleness is a mother. She has a son, robbery and a daughter, hunger. It is no overstatement, therefore, to aver that His Excellency, Governor Okowa is one of those leaders Clarence Randall had in mind when he wrote that the leader must know, must know that he knows and must be able to make it abundantly clear to those about him what he knows. Need I add that indeed Governor Okowa is one of the leaders Emerson also wrote about: there are men who, by their sympathetic attractions carry nations with them, and lead the activity of the human race? Bravo, the epitome of humility You believe, indeed, that life is service.

Governor Okowa worked tirelessly to ensure that warring Deltans embraced peace. You are the Abrahm Lincoln of Delta State. Blessed are the peace makers. For they have freed themselves from sinful wrath, Dante wrote. There is no section of Delta State today that cries about being left in the cold as opportunities are being evenly distributed. Thanks to a Governor that has his eyes on the next generation, not the next election. Warri, the oil city of Delta State is receiving equal attention in terms of infrastructural development like Asaba, the State capital. How even handed can a leader be!

To the wise international investors, i.e the financiers of this octopus of an investment, you are migrating to a peace haven. Be rest assured that you will be in the safest hands at Kwale. We are proverbially hospitable, people with the right mind, law abiding and loving. You will be so overwhelmed with our show of love that you will be intensively acculturated and regard Kwale as your second home.

17 thoughts on “The Economic Imperatives Of Kwale Industrial Park”