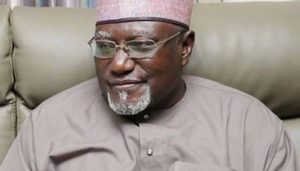 L awal Daura, the dismissed Director General of the Department of State Security goes down in history as the most fanatical and the most brutal in the history of the DSS. He went about his job with so much impunity, dehumanising innocent Nigerians. I am a bit impressed by his dismissal on Tuesday by Acting President Yemi Osinbajo. This was long overdue. However, the Acting President should go a step further by ensuring that this cruel and lawless Daura is arraigned for treason. Shutting another arm of government in a democracy is treason. The lawmakers were further terrorised by the invaders, who were apparently attempting to assist lawmakers plotting to impeach Senate President Bukola Saraki. Daura should not just be condemned and sacked for this naked show of power. He should be put on trial to serve as a deterrent to other fanatical security chiefs terrorizing Nigerians.

Signs that Daura's tenure as DSS boss would be a brutal one emerged on December 29, 2015, when he directed his operatives to storm Sambo Dasuki's cell at Kuje Prison. They abducted him and clamped the former NSA in their detention camp. This was after Dasuki's bail conditions had been perfected, and the warrant of release signed by the court. It was so depressing, yet, the Executive chose to look the other way.

Buoyed by the body language of President Muhammadu Buhari, rampaging Daura in October 2016, invaded the homes of some judges, including those of justices of the Supreme Court – the highest court in the land. The invasion carried out in Gestapo style heralded the unprecedented desecration of the officers of the temple of justice. It is pertinent to note that virtually all the judges who were later arraigned on charges of corruption and money laundering have been discharged and acquitted by the courts. But their tears will probably never dry. The humiliation was unparalleled.

Deranged Daura was also recently in Benue State with his compromised operatives to aid the minority eight lawmakers who attempted to reconvene the Benue State House of Assembly for the purpose of impeaching Governor Samuel Ortom, following his defection from the APC to the PDP. On the day the eight lawmakers reconvened, the 22 lawmakers who were clearly the majority were prevented by DSS operatives from entering the Assembly premises. The eight lawmakers later served a notice of impeachment on the governor and sent a letter to the Chief Judge of the State to set up an impeachment panel.

Daura was a good tool in the hands of the ruling All Progressives Congress, as the party persistently used him to suppress and oppress opponents. Patriots must caution the APC and its senators against truncating our democracy with unrestrained quest and criminal cravings to unseat Saraki. These APC senators had threatened, after a meeting with Buhari, to take action within their powers to ensure the removal of Saraki. I can also vividly recall that the party's National Chairman, the loquacious Adams Oshiomhole dramatically described the position occupied by Saraki as “the crown” of his political party. This is a clear invitation to disorder and anarchy.

Just as Human Rights Writers Association of Nigeria (HURIWA), a pro-democracy and non-governmental body noted, “Any extra-legal move by the APC senators to forcefully reconvene the senate which is on two months recess amounts to a direct threat to constitutional democracy. Any attempt outside rule 12 of the Senate Rule granting powers to reconvene from recess of the Senate in the hands of the presiding officers of Senate President and his Deputy, would amount to high treason which has the potential of destabilising civil rule.”

It is pertinent to remind aggrieved APC senators that there are legal mechanisms for removing the Senate President or any other officer of the National Assembly. They must learn to abide by the rules of the game. The truth is that the APC currently lacks the needed two-third majority in the Senate and House of Representatives to effect a leadership change. Perhaps, this is why emphasis is on this motor park tactics.

It is heartwarming that genuine patriots have been speaking out against the blockade of the National Assembly. The comments of Northern Leaders and Stakeholders Assembly, NLSA, are instructive: “This destructive act against our democracy can only be surpassed by a full blown military Coup d'état. Nigeria's Democracy was restored and nurtured since 1999 on the sweat and blood of patriots after it was toppled by General Buhari himself in 1983. Nigerians cannot therefore seat back and watch all that have been built for nearly two decades destroyed again by headless power mongers on account of their insatiable selfish interests…NLSA also calls upon all Nigerians, especially Northerners, to stand up against this tyranny and condemn it without reservation and defend our democracy and our constitution. Enough is enough!”

The point has been made. All forces of democracy must rise up against impunity. This is the only way forward for Nigeria.

Godswill Akpabio's Comical Defection
I nearly cracked my ribs with laughter watching Godswill Akpabio being received by President Buhari in London after dumping the PDP for the APC. Suddenly, Buhari is Akpabio's father. This is the same Buhari he verbally tormented as Minority Leader in the Senate. These bread and butter politicians will never cease to amaze us. Akpabio is already out with humdrum reasons for dumping the PDP. He said he defected to the APC to salvage the country and that his new party would sweep away poverty and impunity. This man has also been talking about emancipating his people and providing succour to them with his defection. Haba! Akpabio! How much of poverty and impunity has the APC swept away in over three years at the helms? How much of poverty did this man sweep away during his eight years as governor? Akpabio left Akwa Ibom in tatters. He simply swept the state's treasury clean.

For the likes of Akpabio, it's not about ideology but the next meal ticket; and of course, an opportunity to deflect pressure from anti-corruption agencies. Akpabio knows the difference between a Progressive and a Conservative, but his belly and the need for protection from the EFCC supersede. This country can't make progress with people like these. Obviously, Akpabio can't be trusted. I am surprised that he is the only one unaware of this. This is why he is dreaming of working with Buhari. He is the only one that thinks his corruption case is history by joining the APC. Perhaps, he thinks we have all forgotten that the EFCC wrote letters to several banks demanding information on the Akwa Ibom State's accounts amid allegations that he had stolen over N100 billion from the coffers of the oil-rich state.

I also know that the Governor Udom Emmanuel fire also contributed to Akpabio's departure from the PDP. This governor successfully resisted attempts by Akpabio to turn him into a puppet. Majority of the members of the Akwa Ibom State House of Assembly have affirmed support and solidarity to Emmanuel. Apkabio is clearly in for a tough fight in the state.

He has simply destroyed the little that is left of his political vocation. It did not come as a surprise that key stakeholders in Akwa Ibom State politics were glaringly missing during Akpabio's declaration for the APC at Ikot Ekpene, his senatorial zone. Most of his loyalists, who believed he betrayed them also stayed away. Only two commissioners from Emmanuel's cabinet moved to APC with him.

Few hours after Akpabio's comical rally, thousands of Ikot Ekpene indigenes took to the streets of the 10 local governments within the senatorial district to register their opposition to his defection. The rallies held after several town hall meetings where elders across the zone pledged their support to the leadership of Governor Emmanuel. The message to Akpabio is very clear. Unfortunately, he is living in wonderland.

Scary N49bn Bill on School Feeding in Two Years
A monstrous N49 billion has been spent by the federal government on the feeding of primary school pupils in 24 states under the National Home-Grown School Feeding Programme. Yes, that's what the Presidency wants us to believe. According to the Special Adviser to the President on the programme, Mrs. Mariam Uwais, 8, 596,340 pupils are currently being fed in 46,247 public primary schools in 24 states. Wonders will never end in Nigeria.

I was not surprised when the presidential aide added that some officials handling the programme in Benue and Niger states had been handed over to the Economic and Financial Crimes Commission for investigation and prosecution over fraud allegations. This school feeding programme is one big fraud in all the states it is being implemented. If Mrs. Uwais digs deeper, she would discover this. I don't know of any primary school pupil getting value for the outrageous N49 billion pumped into this programme under two years. In most cases, pupils are served wretched food. For me, this huge amount should have been used to empower parents, so that they can feed their children properly.

Buhari's Prickly Vacations Abroad
I find President Buhari's persistent vacation in London horrifying, but unfortunately, there is no law stopping him from doing this. The burden on him is more of a moral one, considering that he had doggedly preached that Nigerians should look inwards for our needs to strengthen the Naira and save our limited forex earnings. Besides, our President should be leading the quest for the growth of domestic tourism. He departed for another of his holidays in London last week Friday and would spend 10 days there. I would have loved to see Buhari dashing to Obudu Cattle Ranch or Yankari Games Reserve. Our President is a big disappointment by running abroad for holidays. I can't remember seeing the President of any developed country dashing abroad on holiday. It only happens in 3rd world countries.

My foremost issue with our dear president is that he is spending public money abroad for his holiday. The Presidential plane will incur parking fees for 10 days. The pilots and cabin crew will be paid and housed with hard currency. Public office holders must be mandated to spend their holidays in Nigeria. Our lawmakers must rise and put in place laws to stop this kind of profligacy, more so in a recessed economy. This must not be allowed to continue in a country where millions of its citizens are wallowing in abject poverty. In this country today, many struggle for a meal a day. Many go to bed without supper and wake up not sure when the next meal will come. Yet, the President of the country spends his vacation in London, spending tax payers' money. This is huge forex in support of British economy, while our domestic economy suffers. What a country! We should all demand a refund of the public money Buhari has been spending on holidays in London.