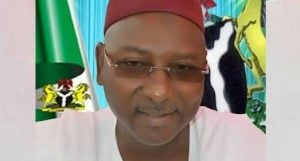 The Deputy Governor of Kano State, Prof. Hafiz Abubakar, has said that the state’s Governor, Abdullahi Umar Ganduje, has degraded his office and rendered him totally useless in office.

According to the Deputy Goveror who through his Senior Special Assistant on Special Duties, Idris Salisu Rogo, his deegrated to the level where his official trips as deputy governor had been self-sponsored for a long time.

Abubakar who has fallen out with his boss said the governor had not been honouring any approval made by him in the Ministry of Finance.

He said that he usually personally paid the allowances due to his staff, including security men attached to him.

He said he was also responsible for fuelling his official cars among other things.

Abubakar admitted that former Governor of Kano State, Rabiu Kwankwaso, was his mentor, but stated that Kwankwaso had also been the governor's mentor in the past.

Abubakar's statement was in response to another one condemning him and issued by Kano State Commissioner for Information, Mr Muhammad Garba on behalf of Governor Ganduje.

The statement issued by Rogo on behalf of Abubakar reads:

RE: YOU ARE TOO INSIGNIFICANT FOR GOVT TO ORCHESTRATE YOUR ROMOVAL FROM OFFICE

There is no doubt that Kano State government is plotting to romove Prof. Hafizu Abubakar, the deputy governor, from the office they were jointly elected with Governor Abdullahi Umar Ganduje judging by the recent public utterances made by the state APC chairman and other party chieftains in the State.

It's not surprising that Kano State government through Hon. Commissioner for Information, Youth and Culture made such press release that lacks merit and full of lies to deceive the gullible in their move to black paint the deputy governor.

It's unfair for the State government to deny the fact that deputy governor's life is being threatened. It's also not true that the deputy governor's office is being held with high esteem by the government. This is because though in some occasions the deputy governor is serving as an Ag governor, his function as an Ag governor is reduced to nothing. It may interest the general public to note that, the Kano State government has not been honouring the approvals made by the Deputy Governor in the ministry of finance. The general public should also wish to note that the Deputy Governor's official trips have not been sponsored by the state government for a long period of time. He usually pays the DTA, accommodation of securities and other official staff attached to him as well as fueling his official vehicles.

Though, again, the statement claims that deputy governor decides on his own to remain in his private residence and went further to claim that he brought the contractor handling the construction of his official residence, it's obvious that there is delay tactics in the manner the government settles the contractor! Every contract demands release of funds on the agreed period which facilitates the completion or otherwise of the project. I want the state government to come out openly and inform the general public of the government's financial commitments in contract of the Deputy Governor's official residence.

The claim that Kwankwaso is the mentor of His Excellency the Deputy Governor of Kano State by the Hon. Commissioner is true but I will like to remind him that even the Governor himself was mentored by Kwankwaso. Where were you Hon. Commissioner when Kwankwaso picked Dr. Abdullahi Umar Ganduje as his running mate in 1999, appointed him alongside with Prof. Hafiz Abubakar as his Special Advisers in the Ministry of Defense from 2003 to 2007, facilitated the Governor's appointment as the Executive Secretary of the lake Chad Basin and finally adopted both as the flag bearers of the APC in 2015?

I will like the Hon. Commissioner to come out openly and inform the general public on how political entrepreneurs hijacked the Governor and entrench the avoidable crises that may consume the political fortune of APC in the State.

The Hon. Commissioner should also come out to inform the general masses of how the so called juicy MDA's under the office of the Deputy Governor such as Kano State Pilgrims Welfare Board are operating.