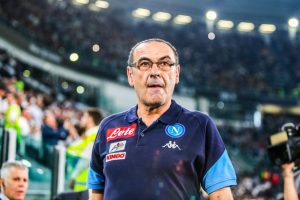 Maurizio Sarri will ask the Chelsea board to sign at least four Napoli players if, as expected, he replaces Antonio Conte as head coach. Conte, 48, remains in charge of Chelsea for the time being but it appears inevitable that he will depart before the World Cup starts.

The former Italy boss won the Premier League title in his first season in England but endured a frustrating second campaign at Stamford Bridge.

His team struggled in the league, eventually finishing fifth and missing out on the Champions League, although they did end the season on a high by winning the FA Cup.

Sarri has emerged as the favourite to replace Conte and is said to have held talks with Chelsea officials this week over signing a two-year deal.

The 59-year-old left Napoli earlier in the month – Carlo Ancelotti was named his successor last week – and Sarri is already reportedly preparing for his move to west London.

According to the Evening Standard, he wants Napoli defenders Elseid Hysaj and Raul Albiol and midfielder Piotr Zielinski to join him at Chelsea if he does become the new manager. Sarri is keen to bring Elseid Hysaj to Chelsea if he takes charge (Picture: Getty) Midfielder Piotr Zielinski would also be targeted by the Blues (Picture: Getty) It is claimed Sarri would also tell Chelsea to move for Senegal star Kalidou Koulibaly, who was strongly linked with a move to Stamford Bridge in 2016.

But despite Sarri’s affection for the players, he may find it difficult to secure the deals as his relationship with Napoli president Aurelio De Laurentiis has taken a turn for the worse. Chelsea are also being linked with Leon Bailey, Jamaal Lascelles and Jean-Michael Seri. Speaking after the FA Cup win over Manchester United at Wembley, Conte was asked about his future and said: ‘I think that after two years the club knows me very well